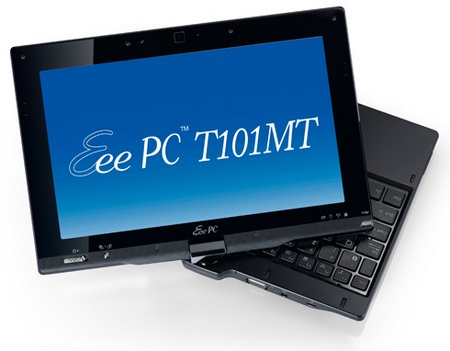 Joanna Stern has a thorough rundown of the ASUS Eee PC T101MT convertible tablet netbook, including everything you could possibly want to know about the touch experience, though once you read it, you won’t want to experience it for yourself. Sounds like it’s pretty good for a resistive touchscreen, responsive and even offering multi-touch. But…

why in the world would ASUS ship a $499 multitouch-capable tablet with an operating system that doesn’t support multitouch or even have integrated touch capabilities?

Yes, the T101MT ships with Windows Starter Edition, same as most netbooks, which does not include the pen and touch features of a premium version. ASUS does their best to offset this deficiency with a variety of software utilities offering touch gestures, on-screen keyboard, and handwriting recognition, but this brings us back to “the inconvenient truth about Windows 7 touch support.” Vendors think cursor control is good enough for touchscreens, and Microsoft doesn’t do much to dissuade them.

Adding to the bafflement is that they went with third-party options for all those features rather than spring for Windows Home Premium. Clearly, ASUS knows they have to provide that functionality, but think the added cost of Home Premium is too much to bear. That’s not good for us or Microsoft.

Anyway, check out Joanna’s post on Engadget for all the details as well as a video demo.