Before the iPhone had launched, late Apple CEO Steven P. Jobs had initially pondered the possibility of creating a unique Apple network on which the company’s flagship smartphone would operate on. Unlike traditional cellular networks–like the ones operated by Sprint, AT&T, and Verizon–Apple’s network would utilize free and unlicensed spectrum, like those made available to WiFi devices, as to avoid governmental regulation and the costs of acquiring spectrum in a competitive bidding process. 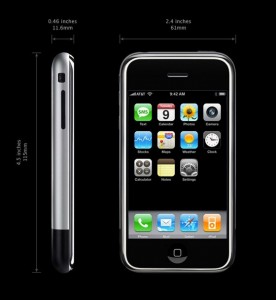 News of the scrapped Apple plan to create its own wireless network was made public by John Stanton, chairman of venture firm Trilogy Partners, at the Law Seminars International event. Stanton said Jobs had wanted to replace carriers. “He and I spent a lot of time talking about whether synthetically you could create a carrier using Wi-Fi spectrum. That was part of his vision,” Stanton says.

The early vision never came to fruition, as history tells us the iPhone debuted in the U.S. under wireless carrier partner AT&T.

Stanton advises carriers to take risks with new devices and services rather than heavily investing in one offering, the latter approach is what Sprint had taken and is being criticized on. The danger is that new smartphones from Google and Apple are taking away from additional revenues–either through sales of apps, music, ringtones, or other services–that carriers would have been able to monetize on before.

Stanton had invested in Danger when he was head of Voicestream, a carrier that would eventually become T-Mobile USA. Stanton says that having access to unique devices was important.