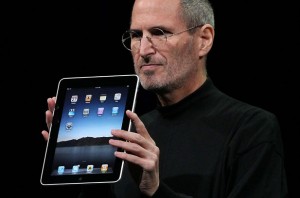 Apple is doing its earnings call with reporters and after the financial news (Apple makes lots of money, sells lots of devices) Steve Jobs weighed in and according to what I’m seeing fly by on Twitter, he’s being uncharacteristically pointed towards his competition.

When it comes to possible 7 inch iPad competition, Jobs basically said that they won’t succeed because they are too small. You didn’t have to wait long before Twitter went crazy with Tweets saying that Apple won’t be doing a 7 inch Tablet, as many rumors have been suggesting.

But keep in mind, Jobs would make an excellent wide receiver in football given the way he bobs, weaves, and head fakes, when Apple is working on something that he wants to keep secret. He’s been known to pooh pooh quite a few things that have eventually showed up as an Apple product. Can you say “tablet?”

But then, maybe he’s speaking what he feels and is trying to protect his market share and knock down the competition before it gets out of the gate. I mean, Apple has only sold over 7 million iPads since April, which is one heckuva head start.

“This size isn’t sufficient to create great tablet apps, in our opinion. While one could increase the resolution of the display to make up for some of the difference, it is meaningless unless your tablet also includes sandpaper, so that the user can sand down their fingers to around one quarter of their present size.”