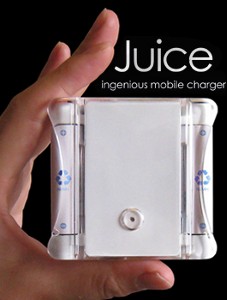 Want to charge your USB-powered device and two AA batteries at the same time and look cool doing it? Well, the Juice charger looks like the right gadget for the job. It’s going on sale in Japan and Taiwan soon from Nobil, but should be coming to the States later.

Yanko Design has the scoop on how it works. The AC plug swivels out from the back, supplying power to the bottom USB port and battery chargers on the sides, called “Air Holders,” capable of charging AA or AA rechargeable batteries. It is also said to “store ‘juice’ for your devices,” but as best as I can determine from the diagram (the product site is in Japanese), this is via the side batteries, which means you’re looking at 2.4V 2900mAh tops from NiMH AA rechargeables. Still, it’s a right pretty package for such a geeky gadget.