This is what you need to know about the Call of Duty: Black Ops 3 weapon ranking system and how you can use this weekend to unlock the attachments and optics you need to make your weapons perform better.

This is not the first Black Ops 3 Double XP weekend in July, but it is the first weapons only Double XP event. This time there is no option to level up your character faster, but thanks to the XP you earn from leveling up your weapons, you can still rank up a little bit faster than normal. 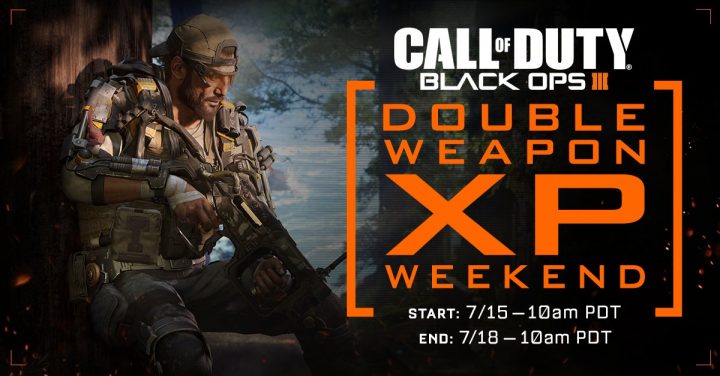 What you need to know about the July Black Ops 3 Double XP weekend.

Be ready for more Black Ops 3 problems than usual, since these events draw in more players and can stress the servers.

With Black Ops 3 Double Weapon XP you gain more XP for your gun with each kill. This will help you unlock better attachments and optics. This will not help you with unlocking camos that require headshots any faster, since they still count as one towards those challenges.

Along with the new weapon buffs and nerfs, there are changes to the attachments and how they impact your weapon abilities. You may need to switch these up — which means you may need to level up those guns more. The Marshal 16 is less powerful, and optics and grips can now deliver reduced recoil.

Here our the best tips we can give you to make the most of the July Black Ops 3 Double Weapon XP weekend.

Play Hardcore – This gives you a better chance at headshots and one shot one kill medals. Headshots don’t count twice for challenges, but you still get twice the weapon XP.

Aim for the Head – Yeah, we know that we covered this, but when you come around a corner aim higher than you normally might to snag that headshot.

Unlock a few New Guns – If you have unlock tokens, now is a great time to use them to unlock a few guns and take them for a spin with Double Weapon XP. It is tough to go from a favorite with all your attachments to a stock gun.

Switch it Up – With Double Weapon XP you can get the hard part of unlocking an optic and two or three attachments out-of-the-way faster. Cycle through three or four new weapons you want to use to get them all to a more usable state.

You can use our Call of Duty: Black Ops 3 tips to level up faster and be sure to read our Black Ops 3 guide to get the most out of this time.