The Kanex Syndee iOS Recharge Station may be the device for you if your family fights over a single iPhone/iPad charging cable. The Kanex Syndee is designed to charge up to four iPads, iPods or iPhones simultaneously. Needing to charge so many iOS devices might sound like the ultimate first world problem, but many households do run into issues when trying to keep all of their gadgets juiced up.

The Kanex Syndee can stack up to three iPads in a relatively small footprint, with the top-most iPad remaining fully usable. The fourth iPad (or iPhone) doesn’t have a place on the charging station and needs to be placed next to it. 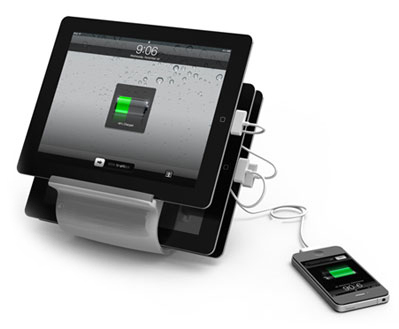 Unlike some iOS charging solutions, the Kanex Syndee offers plenty of power to charge iPads, with up to 2.1 amps of power dedicated to each to device. Some iOS charging solutions don’t provide enough power to charge iPads as rapidly as the stock iPad charger. The Syndee comes with a three 30-Pin charging cables, which jack into the base of the charging stand. If your house isn’t all iOS, you can use one of the USB ports to charge your Android phone or other non-iOS devices. You have to supply your original iPad charger to connect the Syndee to the wall socket and for the fourth 30-pin cable. 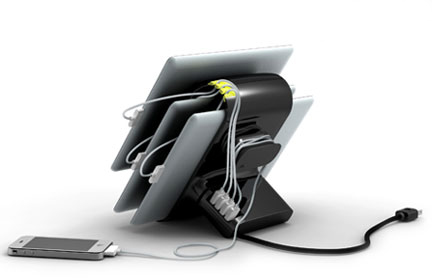 The Kanex Syndee will make its formal debut at MacWorld/iWorld next week. Its MSRP is $149, which may be a little steep for most iPad users. Then again, if someone can afford four iPads, they might be able to spring for one of these things.