If you’re the kind of user who only needs a portable hotspot on occasion, buying one from your wireless carrier costs too much. It’s not worth it to add even $20-$40/month as we only use it a few times a year or for a few hundred megabits a month. The pay-as-you-go Karma plan steps in to solve these sorts of issues, connecting a computer or tablet to the Internet without draining the phone’s battery. 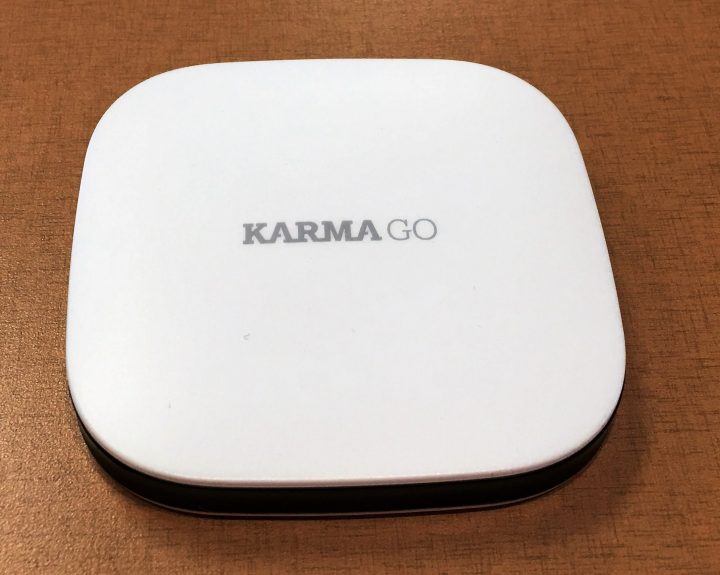 Karma also will give you a monthly plan, if your wireless carrier’s devices don’t appeal to you.

To start, a customer will buy the tiny white Karma Go Hotspot for $150 direct from the company’s website. It’s small and light. The white box has rounded corners. The package comes with a micro-USB charging cable, a nice carrying case and the hotspot. 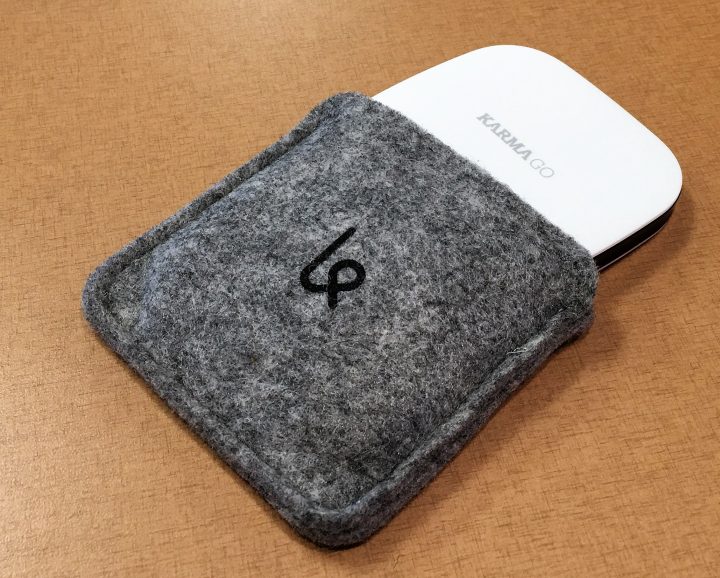 The power button turns the Karma Go on/off. An indicator light notifies the user when it’s powered on. Four other lights show the signal strength from one light to four lights, showing a minimal connection to a full-speed connection. 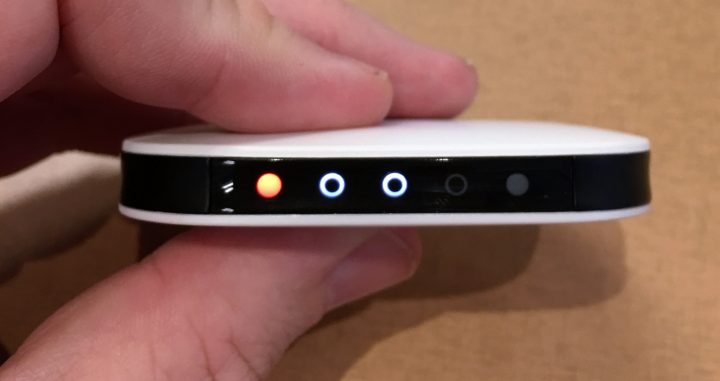 The Karma Go hotspot weighs next to nothing at only 2.3 ounces. It measures 2.9-inches by 2.9-inches and only .47-inch thick.

The 1500mAh  battery lasts for 22 hours on standby on a single charge. I never depleted it even after just under five hours of continuous use.

Users can network with the devices connected to the 802.11 b/g/n network. The speeds top out at 54Mbps for local networking. 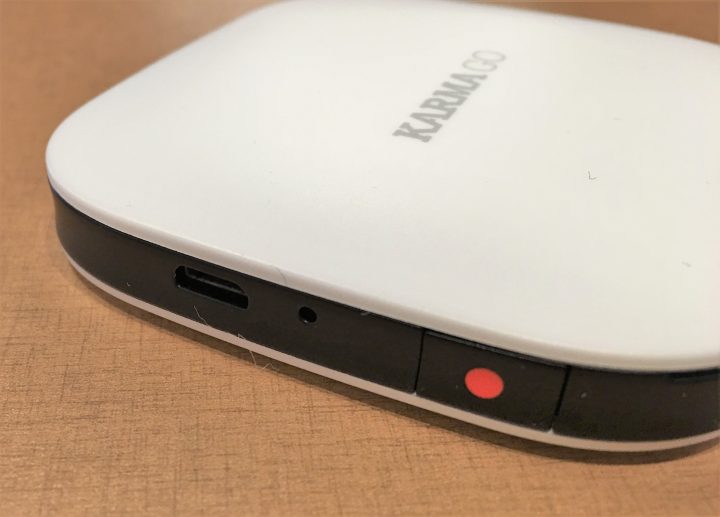 I tested the Karma Go hotspot comparing it to T-Mobile and a public Wi-Fi hotspot I frequent. This gives potential buyers an idea of how fast it runs works for both wireless data online and local networking between computers. 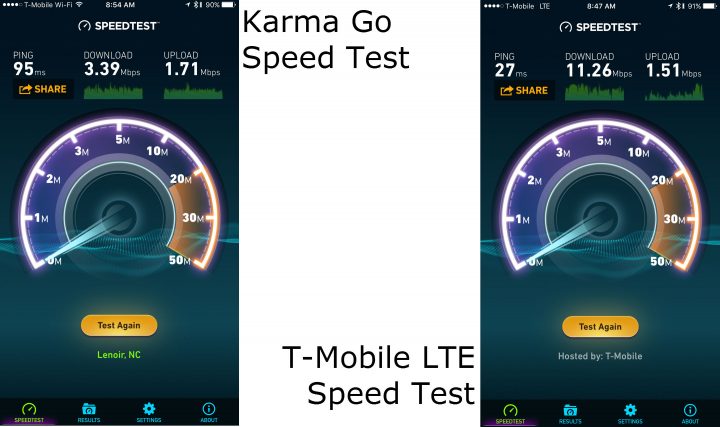 The two speed tests above came on an iPhone 6s Plus. The left test taken while connected to the Karma Go saw a download speed of 3.39 Mbps and 1.71 up. The test returned similar results multiple times. On the right we see the speeds over LTE using a T-Mobile connection. Notice that the speeds show a connection nearly three times as fast. Upload speeds returned similar results. 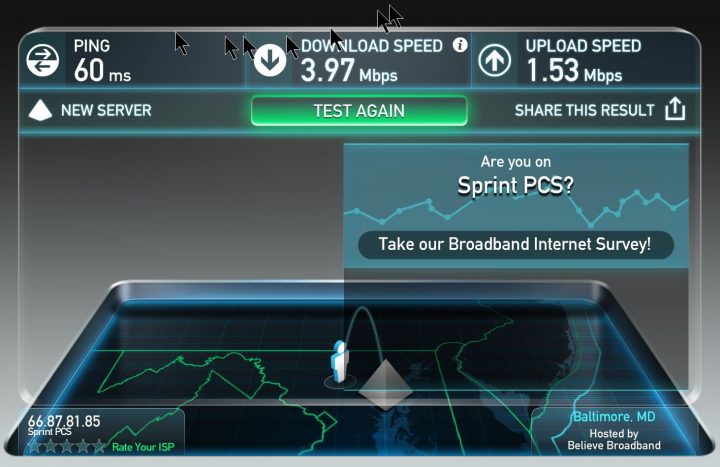 Notice a similar speed in the above test run on a Microsoft Surface Pro 4.

As the above tests show, the Karma Go offers pedestrian speeds. Slower LTE speeds with T-Mobile (when compared to AT&T and Verizon in my area) are still three times faster than the Karma Go hotspot. Karma runs on Sprint’s network, which is pretty slow in my semi-rural area. I’ve run speed tests in a nearby metropolitan area where the speeds hit closer to 5Mbps on average, but that’s still much slower than my T-Mobile phones.

I use the Refuel plan which is explained below. It promises speeds from 6-8Gbps to 25Gbps. As with almost every Internet company in the world, advertised speeds are seldom realized in reality. 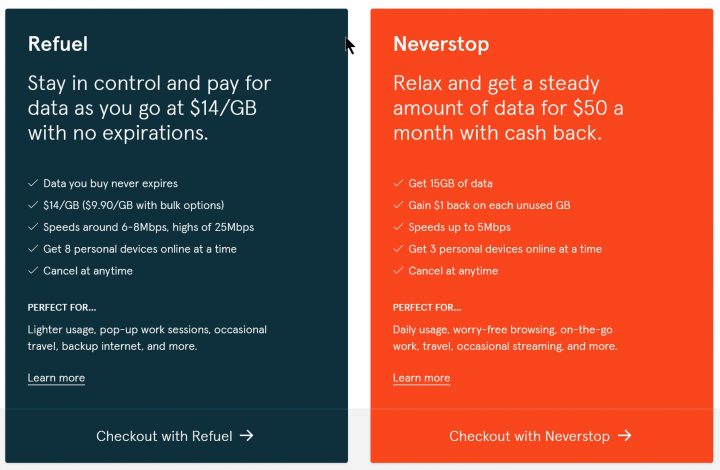 Karma offers two plans. The most interesting plan, Refuel, works like a prepaid data plan, which makes more sense than the monthly plan. A monthly contract makes more sense as an add-on to your already existing wireless carrier contract. You’d pay less adding one to AT&T, Verizon, T-Mobile or Sprint than the $50/month for the monthly Karma plan.

The Refuel account never expires. This makes it perfect for people who only need it on occasion for trips or work sessions with co-workers while away from a regular wireless network or outside their carrier’s network. The hotspot keeps working till the data runs out and then offers to sell the user more data.

A Refuel account lets users surf at faster speeds, 6-8Mbps on average and spiking at up to 25Mbps in some areas.

On a Refuel connection, a person can connect up to eight devices to their Karma Go hotspot but only three on the Never Stop plan.

The traditional plan, called “Neverstop” by Karma, gives the user “unlimited data” for $50/month. In reality, it’s limited to 5Mbps speeds on the first 15GB of data. After that, it slows down the speeds to a rate only good for things like checking email and surfing text-heavy websites. You won’t want to stream video or music or download very large files since it will either eat up your data or take forever to download. 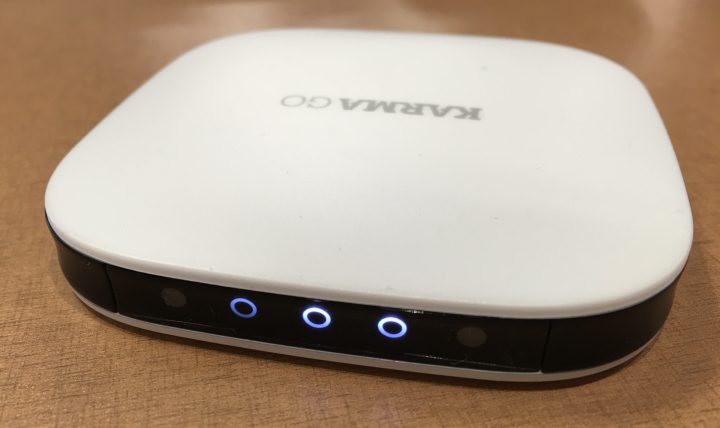 I’m happy with the Karma Go, but it has limited use cases. Most people won’t need such a device. It’s handy for the following situations:

If any of the above describes your situation and you don’t mind the $150 up front and the somewhat expensive data, the Karma Go can meet your needs. Also, Karma lets users earn free data by recommending the service to friends or family.

Karma Go speeds won’t impress very many people, but it’s adequate given the use cases described above. It will never be the best option in my area. If you can borrow a friend’s Sprint phone or go to a nearby Sprint store and test speeds there, you’ll get a better idea of what speeds the Karma Go will deliver for you.

The hardware works well and the network on the Refuel plan works dependably enough to make it useful. It’s been a good investment for me and I recommend it to users with the needs listed above.