Verizon’s 4G LTE network was down yesterday, for the third time this month. These increasingly common network outages have left 4G LTE smartphone users stranded without any data connectivity on their high-end smartphones.

For business users, this means lost money and lost productivity. For the average user, this means no Facebook, no email and no browsing the web.

While many of us had no 3G service yesterday, Verizon claims that there was no 3G data outage. This is technically true, but many 4G LTE smartphone owners found themselves without 3G on December 28th.

In theory, when 4G LTE networks fail, phones like the Galaxy Nexus should default to 3G, but this consistently does not happen. The best explanation I have heard is that the phone will keep asking the tower for 4G LTE, which cancels out the 3G signal coming from the tower. Not very technical, but easy enough to understand.

In order to keep some connectivity on your Galaxy Nexus, Droid RAZR or other 4G LTE phone, you will need to manually turn off 4G LTE. This will force the phone into 3G mode, and allow you to connect to the internet, albeit 10 times slower.

You can click on the links below for detailed instructions. It is pretty easy to turn off 4G LTE and turn it back on later. The Galaxy Nexus is incredibly easy, as is the Droid RAZR.

How to Turn Off 4G LTE 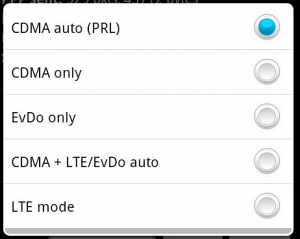 For many phones, you can use these steps to turn off 4G LTE:

To reverse this, do the same, but choose CDMA+LTE/EvDo auto

Switching to 3G should help you keep your data connection when the next Verizon 4G LTE outage happens, hopefully it won’t happen until next year.