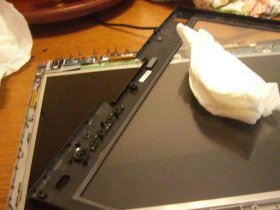 Instructables has a basic rundown of what to do to keep your notebook running clean and, as a result, running cool. Yep, dust can clog your cooling system and collect in places to trap in heat, so a cleaner system is indeed a cooler one. Since there are so many designs to cover, they just point out the basic spots to clean. Fair warning: getting to those spots isn’t always as easy as removing a single panel, so use your judgment. How I cleaned mine (and the number of screws I needed to remove) is after the jump.

I cleaned my Toshiba R25 Tablet PC system some months ago when I attempted to upgrade my wifi card (swapped it fine, but it wouldn’t work). Required a full removal of the bottom panel, which meant plucking out about two dozen screws (including two around the screen hinge) and removing both the hard drive and DVD drive, not to mention the battery and keyboard. While the upgrade didn’t work, the endeavor was worthwhile for the cleaning (and to learn where everything was).

Although I spritz the fan with an air can every now and then, I found dust in spots that just couldn’t be reached from the outside, and getting at it from different angles really helped get the dust entirely out. There was a noticeable difference in the fan usage when I was done. Definitely cooler.

And we Tablet PC users know cleaning isn’t just for fans and motherboards. Dust always seems to find a way to creep under my screen. I did a full wipe down of my screen almost two years ago, which I maintain by pulling back a corner of the front panel and spritzing with an air can. Still, dust doesn’t really get blown out that way, so I should pop the panel and get into the corners when I do my next cleaning.

Hope that story of screws and dismantling didn’t scare anyone off. Anyone else brave (or crazy) enough to clean their own notebooks and tablets?