There are lots of companies experiment with wireless charging technology at the Consumer Electronics Show this year. Kensington is packing the technology into a must-have notebook accessory that’s not known for being hi-tech. The new Kensington SmartFit Wireless Charging Laptop Riser provides users with a batter angle to better see their notebook’s screen. It also comes equipped with wireless charging for a smartphone or tablet.

It was at CES 2016 that Gotta Be Mobile was able to check out the Kensington SmartFit Wireless Charging Laptop Riser in person. The arms and base of the notebook accessory are made out of durable aluminum, ABS and steel. Laptop risers are specifically for keeping notebooks at eye-level that otherwise might be uncomfortable to interact with on a daily basis. Typically, they are used in setups where there’s another monitor and keyboard attached. The SmartFit Wireless Charging Laptop Riser allows users to adjust their experience around their hand placement with an included chart. 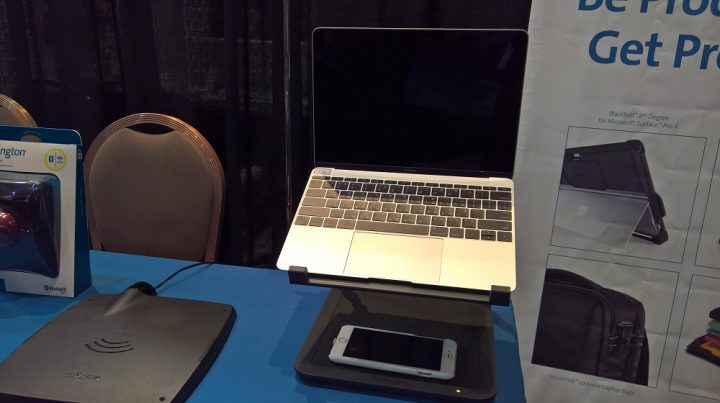 Kensington knows that users like to keep their smartphone in plain sight when they’re working on their PC. Rather than run a MicroUSB Cable, the SmartFit Wireless Charging Laptop Riser’s lower base offers Qi Wireless charging so that a host of Android and Windows Phones can be charged without a separate adapter running along the desktop surface. Wireless charging works by running current through a coil that’s embedded in the device itself. The iPhone doesn’t have wireless charging built-in. Instead, owners of Apple’s latest smartphones will need to purchase a case made specifically for wireless charging.

The company also knows that users want more than better ergonomics on their desktop. Millions use accessories at their desk that require a direct connection to a USB Port. The Kensington SmartFit Laptop Riser doesn’t include a USB hub or dock, but does allow users to add one to their setup with a separate purchase. There’s specific areas to attach these accessories to on the riser.