The Kensington Virtuoso Mini Collapsible Stylus for your iPad or iPhone promises to give you a compact inking tool that connects via a small black cylinder to your iOS 30-pin dock connector. ‘

As their website copy says, With it you get “… quick access and you never have to worry about losing your stylus again.” The quick access part’s true, but I can’t support their claim of never worrying about losing it. In fact, I worried I’d lose it the entire time I tested it.

The stylus comes with a connector that attaches to your 30-pin dock connector. The stylus slides into the cylinder with both ends open that’s attached to the connector. It measures slightly shorter than the width of an iPhone. Slide the stylus out of the silo and pull out on the non-pointing tip end and it expands to almost double the size. 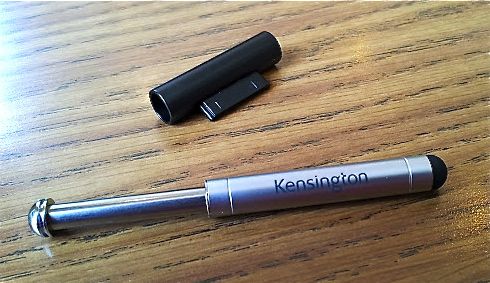 I love the idea of the Virtuoso Mini Collapsible Stylus. I hate carrying around a stylus but love using a good one. I wish Apple included one with a holder built into their devices like the Samsung Galaxy Note or my old Windows Mobile phones and Palm Pilots used. Connecting to the dock gives you that functionality.

The stylus tip works as well as other styli designed for capacitive touch screens, which means it feel like inking with a mushy thick magic marker instead of a fine tip pen. That’s a fault of the touch screen technology and not Kensington’s design.

Kensington has plenty to answer for in terms of the Virtuoso Mini Collapsible Stylus’ design. 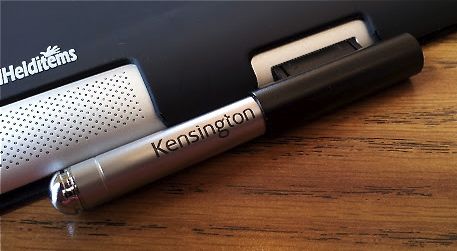 I question Kensington’s promise of not worrying about losing your stylus because it slides out of the holder too easily. It takes no force at all for it to slide out onto the ground as you’re carrying  your iPhone or iPad. I didn’t lose it only because I very carefully held the thing so it wouldn’t fall out.

For people with big hands like me, you’ll find inking uncomfortable even when retracted. The thing’s too short. 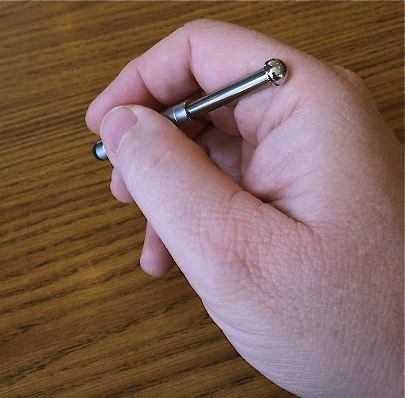 There’s one good thing I can say about the Kensington Virtuoso Mini Collapsible Stylus: it’s cheap at only $15.99 directly from Kensington (normally $19.99).

I can’t recommend it, even at that price unless you’re a small-fisted person and don’t mind putting a layer of tape around the shaft of your stylus so it won’t slide out. That’s what my son did to make it stay in the silo perfectly while not in use. Even then, you can’t use it with a case on your iPhone or iPad.