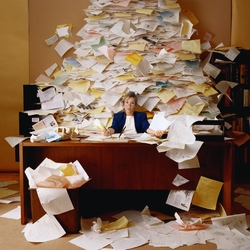 I envy fellow GBM and Notebooks.com team member Kevin. I really do. He posted yesterday about how much money he saves by using a Tablet, in his case an iPad in his daily chores and life. Trust me, I’ve tried to do the same thing and on some levels I succeed. But, I’ve come to believe that the more folks you interact with, and the more hectic your schedule is,  the more you’re going to be dealing with paper, no matter how much of a paperless strategy you adopt. I think that might be a recursive sort of thing.

I’ve been trying to go paperless since the early Tablet PC days and each year I make some progress. On a Tablet PC, taking notes and collecting data in OneNote was (and still is) a boon to my productivity. Until I went into a meeting, or an audition, or a rehearsal. Those are the three places I do most of my work where I need data available. I’ll give you a couple of examples of how things have improved and how they’ve stayed unfortunately status quo.

First, let’s take rehearsal. Before we started seeing scripts available digitally I used to scan them in and take notes directly on the script page in rehearsal. This saved me a lot of time in the moment and also a lot of effort in trying to read back my notes as I had the line that sparked the note as a visual reminder. The key there is “in the moment.” It’s not a direct tradeoff, but the time to scan versus the time saved “in the moment” certainly aren’t equal if all you’re measuring time. But the difference here is productivity.

I still do this and love when a script is available digitally and increasingly they are. Scanning a script in is time consuming and frankly not a fun task. It is far easier to take notes this way on a full fledged Tablet PC using OneNote than it is on an iPad or other current Tablet, simply because, well OneNote is designed up front to let you do that and the hardware and Windows software combo make it a snap to do. While I keep encouraging iPad developers who are trying to “think in ink” to continue their efforts, they are still held back by limitations of iOS and the hardware. It can be done, but the process is not effortless and in my case, it needs to be. I can’t speak for Android Tablets as I don’t have one. But sooner or later some Tablet manufacturer is going to hit the sweet spot on this for note takers who like to use existing text to take notes on. I had great hopes for the HTC Flyer, but until Google straightens things out with an Android Tablet OS, I’m just not interested.  So, why not just stick with a Windows Tablet PC? I do go back and forth between an iPad and a Windows Tablet PC in this kind of work. There are tradeoffs with both. This area of my work is a moving target but it is moving in the right direction.

When I go to some meetings I prepare a lot of data. While it is really easy for me to have all the documents I need on my iPad and work from there, unfortunately others who attend the meetings still require paper. Take committee meetings for the theatre where I work. We prepare reports and send them out via email ahead of time so the participants can be prepared. As we are always struggling for dollars here, we include a headline on each document that we won’t be printing these documents out for the meeting so please do so yourself and bring your copies. Unfortunately we’ve learned that, at least in our case, we still need to have hard copies available. I guess it is human nature that folks wait until the last minute. Unfortunately it is also human nature that they seem too often to forget to print out the documents. And when you’re reviewing data, if they don’t have it in front of them, well, the point of the discussion just crumbles. Believe me I’ve tried, but I can’t get past this with the folks I do business with. I don’t see this improving anytime soon in my case.

I’ve written reams about trying to find a better way to deal with the crushing weight of paper from resumes and photo headshots at auditions. Not only does the system of collecting headshots and resumes require toting folders of paper around, it also requires filing cabinets to store them, and staff time to do the filing. It’s costly for everyone involved. I’ve thought a couple of times about trying to set up a digital database of these pictures and resumes, but time is money and we never seem to have enough of either. So, this might be a case of us being too focused on the immediate crush of work and not looking ahead to a better solution. I’m actually eager to use the iPad 2’s shoddy camera to capture some photos and headshots at my next set of auditions, but I haven’t found the appropriate software solution for that yet, although Evernote might be the closest that there is.

The reason I say this is that fortunately we increasingly receive headshot and resume submissions digitally. That usually happens via email, and these are the submissions that used to come via snail mail between auditions. The documents come in as attachments and get imported into Evernote.  (Boy do I wish there was a “Print To” Evernote feature.) This is saving a lot of folks money (paper versions of resumes and headshots are expensive) and we’re seeing a continually diminishing number of “paper” submissions each year.

So, I’d call going paperless in casting for me a moving target with a lot of unfulfilled potential at present.

And then there’s me. Try as I might, I find that there is just some work (usually with numbers and spreadsheets) where I need to have a piece of paper in front of me before I can actually see the info I’m looking for, whether that be a trend or a just a specific number. It’s a hard habit to break and one that I’ve tried many times to kick, but sometimes I just need to bury myself in a stack of budget printouts to find my way to the answer I’m seeking.

A big part of this is comfort zone stuff. When you’re in the middle of working on a crazy crash project or preparing for a meeting it is difficult to switch tools and break out of whatever comfort zone you’ve established. At least it is for me. Maybe that’s and old dog learning new tricks (although I love to learn new tricks), maybe its a symptom of just how insanely busy we are at times, I’m not sure. In either case, some of this has as much or more to do with me and not the technology.

I’m sure some, like some of the comments on Kevin’s post, will say why even attempt this on an iPad or some other current Tablet when you can use a full fledged Tablet PC. Well, there’s two reasons for that. The first is mobility or portability. Current Tablets are much easier to tote around and use throughout at day due to the size and weight. The battery life is a big plus here as well. Secondly, and I’m sure I’ll take some flack for this, even though I can’t quite get the Inking experience I can with a Tablet PC, the trade offs in my case are worth it, because I’m not dealing with the common hassles we all know and love that come with using Windows.

So, again, I’ll sit back in envy of Kevin and wish I could be as progressive. Whether the obstacle is my own obstinacy, or human nature, or the circumstances derived from the work I do, I’m not there yet. That’s not to say that the tools I have found time to incorporate don’t save me time and help me be more productive. They do. It’s just that I’m not currently in a position to go as far as I would like.