Keyboards going the way of the dodo? 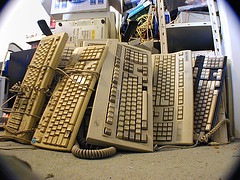 Anyone who has used a computer has used a keyboard.  Before that, it was a typewriter.  We as a society are all familiar with keyboards.  We type on them everyday.  Its the input device of choice, combined with a mouse, to enter data into our computer and make our day productive.  Well, this is us now, what about in 5 years?  Well, if the new Gartner study has anything to say, keyboards will go the way of the dodo bird, doomed to extinction by touch screen devices.  Who is going to bring about this change?  The tweens.  The 13-15 year olds who will emerge in 5 years who will be used to an iPhone, and iPad, and other touchscreen devices.

According to their latest study, Gartner has said that more than half of PCs purchased for use by under 15s in 2015 will have touchscreen.

“Multitouch on smartphones and the Apple iPhone phenomenon have shown users how useful touch can be with the right implementation, and Apple’s introduction of the larger iPad has set off a wave of speculation about changing the industry,” said Leslie Fiering, research vice president at Gartner.

“What we’re going to see is the younger generation beginning to use touchscreen computers ahead of organisations.”

Gartner said the “muscle memory of mouse users and the potential problems of moving a user’s hands from the keyboard to the mouse will create particular adoption barriers” in business use.

“As with many recent technology advances, touch adoption will be led by consumers and only gradually get accepted by the organisation,” Fiering said.

“What will be different here is the expected widespread adoption of touch by education, so that an entire generation will graduate within the next 10 to 15 years for who touch input is totally natural.”

I don’t know how I feel about that.  I am used to a keyboard.  I am a touch typist, so a keyboard just works for me.  I use a touchscreen on my iPod Touch and my G1.  It took a little getting used to, but I mostly have the hang of it. I only swear at them occasionally now, instead of hourly.  Would I miss a keyboard?  I am not sure.  I typed on the new iPad recently and it was fairly responsive for me.  It needs a little work to feel like my Logitech keyboard.  I like feeling the resistance of keys and the “click” noise they make when typing.  Will touchscreens take over?  We’ll see what consumers have to say.