The new Kia Telluride concept shows a more connected in-car experience and combines a new look that highlights what a new Full Size Kia SUV might look like with exciting new features.

The doors open to 90 degrees for a wide open entryway and the interior of the Kia Telluride includes black leather captain’s chairs, with the two in the middle row reclining to almost flat with foot rests when you don’t need to use the folded third-row seat. Looking into this vehicle makes us wish such a design existed for family road trips a decade ago. 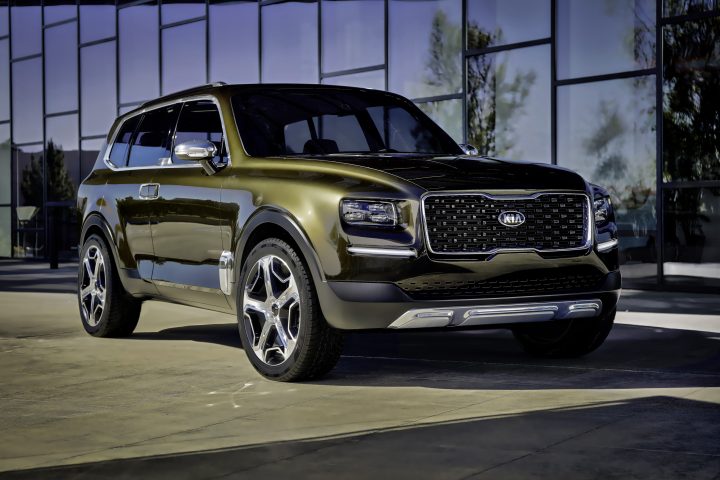 The seats include precisely cut openings that can contain Smart Sensors that capture the vital health information of four passengers. This information displays on interior door panels and syncs to a Light Emitted Rejuvenation system (LER).

The LER is a wing-shaped LED panel that sits below a panoramic sunroof to deliver therapeutic light designed to combat jetlag and improve energy levels.

Additional technology features in the Telluride concept is Swipe Command. This is a thin touch sensitive band on the second-row center console that allows passengers to control the music over the seven-speaker Harmon Kardon speakers or to use included Harmon Kardon headphones stowed in the console where they wirelessly charge. The console includes support for wireless charging of smartphones on the go. 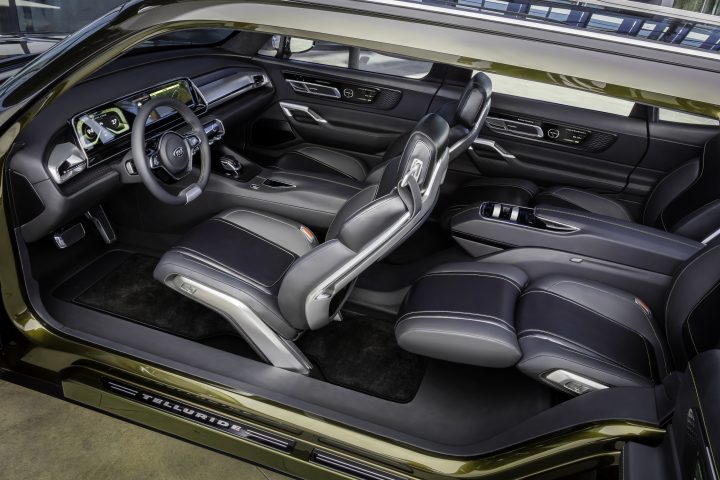 To start the car, users simply press the fingerprint activates pushed button start to bring the 3.5L V6 to life that pairs with an electric motor and drives the PHEV powertrain. A combined 400 horsepower, 270 from the V6 and 130 from the electric motor can deliver 30 mpg highway. The concept uses an all wheel drive system to rout power to all four wheels.

The Kia Telluride is 70.9-inches tall, 79.1-inches wide and 196.9-inches long. That is larger than the Kia Sorento in all aspects even though it sits on a modified Kia Sorento chassis that stretches the wheelbase.

Though the Kia Telluride concept is a concept it is based on a current Kia platform. The company told Gotta Be Mobile that the vehicle expresses the brands interest in selling a luxury SUV.

“The Kia Telluride makes an aesthetic statement for the Kia brand as a bold, all-new luxury SUV with an abundance of advanced technology, focusing particular attention on the experience and comfort of second-row occupants,” said Tom Kearns, chief designer, Kia Design Center America, adding, “Longer, wider and taller than the recently redesigned Sorento CUV, Telluride allows us to envision what a full-size seven-passenger SUV from Kia could look like.”

In the announcement of the Telluride, the company states that there are no plans to bring this specific vehicle to production, but states, “Kia’s large SUV is anything but a utopian fantasy.”