At what age did you or will you get your child a cellphone? As more and more kids carry phones, this question becomes important for parents. Should a child get a phone as soon as they want one? Why would they need one? Are children safe with one, especially if it can access the Internet?

Verizon Wireless conducted a survey along with Parenting.com asking parents that question.

As a parent of two teenage boys the results were not that surprising to me. Nearly 40% of the 519 parents surveyed said they did, or will give, their child a cell phone between the ages of 13 and 15. Another 32% said their child got one during ages 10-12. Just over 10% got their child the first phone at 16 years or older, while just under 10% bought the first phone at age 7-9. Only 7.5% of the parents never plan to get their child a phone with less than a percentage point of kids under 7 getting their first phone.

The following are the exact figures in descending order by age : 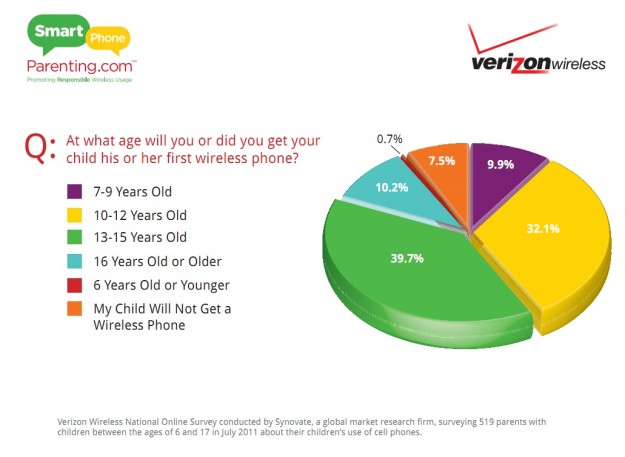 I wish they had also asked what kind of phone they did, or would give, their children. When do you buy your child a smart phone, if at all? Should the child only get a feature phone? I’m guessing that most of these phones are not smartphones. Like shoes and clothing brands set us apart when we were kids, the kind of phone a child carries affects his or her status among peers now. A few years ago having any phone at all meant you were someone. Today, a beat up old flip phone says you are the dork, while the cool kids carry the iPhone 4.

Aside from status symbol, cellphones also provide convenience to parents. I bought my boys cell phones when they starting playing school sports in middle school. It was so much easier to have them call me fifteen minutes before they arrived back at school after away soccer games or track meets than to have to wait at the school for the team bus, which was often late. It is also nice to be able to text them during the day to say I will be late or their mom will pick them up instead of me.

The two biggest issues I faced in making the decision were cost and safety. At first my boys were given very basic feature phones with the most limited contract available. Unfortunately, my oldest son blew away his text message allotment in about four days and I told him he could have an unlimited text plan if he paid for it. When he begged for an iPhone for Christmas, I gave in and bought him one not really thinking about the added expense of a data plan or the surprising expense when he went over his 200 MB/month allotment. Once the oldest son had an iPhone the younger one felt slighted. So when he started playing soccer, I bought him as well, sending our AT&T bill into the stratosphere. 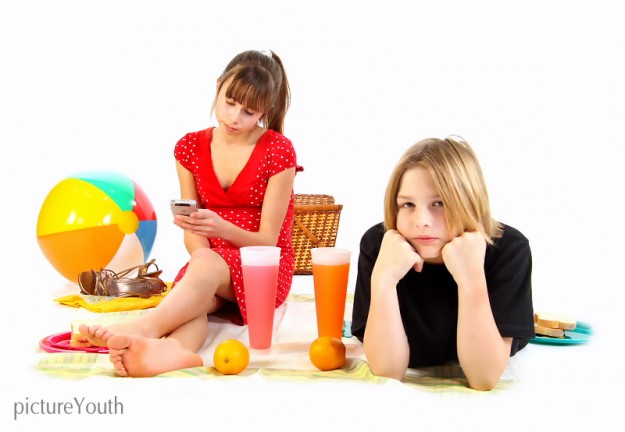 Before making the decision, do your homework and do the math. Factor in the cost of the phone itself, the contract (minutes, texting and data if you give them a smart phone), and the cost of accessories. My son cannot carry his iPhone without a case or it will be broken in a matter of days. He has a rugged case that stands up to punishment.

Consider safety, too. Do you want your child to be able to access adult content on something as private as a smart phone? He or she will be able to if you get them a phone that can get online or receive pictures via text. Sadly, many kids are taking photos of themselves nude, or partially nude, and sending them to each other. Have a conversation with your child about this when you give them a phone. Make your expectations and values clear, and set boundaries with the consequences spelled out. Stick to them.

Set Rules for Use

We have a rule that I can take either of my sons’ phones and look at the history in Safari anytime I want. If he does not agree to that rule, he doesn’t get a cell phone. Some might say that I don’t trust my son. They would be right. I don’t. Because I used to be a teenage boy.

You have to decide what best works for your family. My oldest son didn’t like the rules at first, but he’s used to the idea now. I don’t check it nearly as much as I used to now that he’s 17 and I’m trying to provide him with more freedom. His 13 year-old brother gets his phone checked more often, but as he grows up I will relax it for him too.

My son can clear the browsing history, but I told him that if he does I will assume that it means he was hiding something and will take away his phone. Strict? You bet. But it works for us.

If you don’t want to check your child’s phone like I do, you can put parental blocks on their usage, but that adds cost to your monthly contract. With AT&T “Smart Limits for Wireless Parental Controls” adds $5/month to the bill. They let you control when your child can get online, what they can see, and who they can call. Contact your carrier to see what it takes and how much it costs. I chose not to pay the price and use spot checking to police their usage.

Finally, you have to decide if you want your child to have such a distracting piece of technology in school, church (if you attend one), or at night when he or she should be sleeping or doing homework. Our boys go to schools that have very strict no-tolerance policies about the use of a cell phones during class. They use their phones’ Bible apps at church, so I let them carry them there but made it clear that they are not to send text messages or play games. At night, they are required to plug the phone into a charger in my bedroom in order to keep from staying up all night texting with friends. We relax this rule on Fridays and during the summer.

Set the rules and stick to them. You have to decide what rules to have and how to enforce them. Cell phones represent a level of freedom and self-determination for a child. We promised our boys that we would never take away their cell phone as a punishment for anything other than breaking the rules of the phone. So, if they mouth off to me, I don’t take away the phone. I use another form of punishment. Unless they fail to plug the phone in at night, look at objectionable content on the Internet or use the phones at inappropriate times like during school, we don’t take it away.

Survey PDF – from Verizon and Parenting