Kindle users may soon enjoy lower prices on eBooks thanks to a new antitrust lawsuit filed by the U.S. Justice Department.

The government challenges the legality of the Agency model. Introduced in 2011, this is the reason that some books on Amazon say, “This price was set by the publisher”.

Typically books priced by the Agency model have a higher price than those that Amazon can price as the company pleases. According to the Department of Justice consumers have overpaid, tens of millions of dollars” for ebooks. 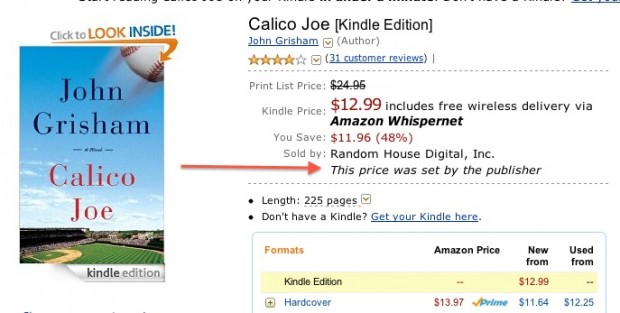 Kindle eBooks could get cheaper, at least bestsellers.

Under the Agency model publishers of ebooks can tell vendors what to charge, instead of selling the books to Amazon and Apple at a wholesale price and allowing the retailer to set the price, like they can in a physical store.

Amazon is not a part of the antitrust lawsuit, but the company issued the following statement, “This is a big win for Kindle owners, and we look forward to being allowed to lower prices on more Kindle books.”

Amazon can lower ebook prices once publishers settle with the Department of Justice and go back to the wholesale model, which allows Amazon to set eBook prices for Kindle copies.

Bloomberg reports that Simon & Schuster, Lagardère SCA’s Hachette Book Group and  HarperCollins have already settled, but Macmillan and Penguin are fighting the lawsuit along with Apple.

Don’t expect Kindle ebooks to go on sale for 50% off tomorrow, but I wouldn’t be surprised if Kindle ebook prices drop below $10 on a number of titles in the coming days.

Tobias Buckell, a New York Times Bestselling author, believes that frontlist bestsellers will see the biggest discounts and backlist book prices will be higher. Buckell offers an in depth look at Amazon’s past pricing behavior to back up his prediction.

What do you think of this news? Will you buy more ebooks if they are priced at $9.99?