Not one to shy away from discounting its own tablets, Amazon has knocked down the prices of its Kindle Fire HD and Kindle Fire HDX tablets for a limited time.

The most recent Kindle sale was just earlier this week, when Staples knocked off $30 from Kindle ereaders and tablets, but this is the first time in almost two months that Amazon itself has had its Kindle Fire lineup on sale, where it discounted its Kindle Fire HDX for Valentine’s Day. 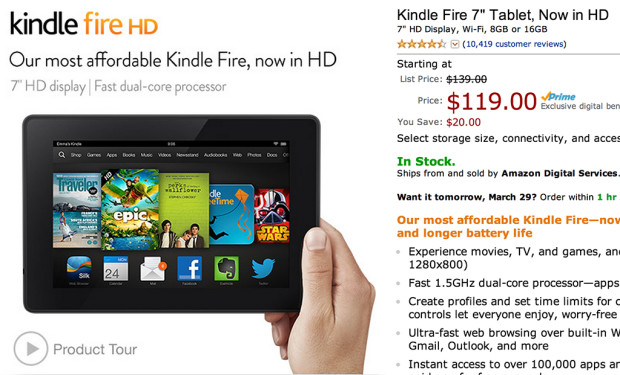 Of course, the discounted prices are with Special Offers intact, meaning that you’ll see advertisements here and there, but you certainly can’t beat the price. If you can handle the occasional ad, $119 is a fantastic price for a decent tablet, and it’s pretty much an instant buy considering you’re only paying that much dough for something that you’ll get a ton of use out of if you take advantage of Amazon’s various services regularly.

The Kindle Fire HD and HDX have been discounted several times this year, and Amazon has never been shy about chopping the price on its own hardware. You can usually take advantage of Kindle hardware sales throughout the year, so there’s almost no reason not to wait for a good deal on a Kindle ereader or Kindle Fire tablet.