Thanks to the new Kindle Fire, eBooks on the Kindle platform are about to get a whole lot nicer to look at.

Amazon has mostly focused on its e-Ink devices, which feature plain backgrounds and text-oriented user interfaces and presentation. As a result, the Kindle’s book format, Mobi, has been similarly text-focused. Amazon Kindle readers don’t allow much in the way of fonts, formatting or other aspects of design. As a result the books are very plain.

Amazon’s competitors have used the open format of ePub, which allows CSS styling and fonts, transparent pictures, and a whole lot more. If you read books on the iPad or Nook Color, you’ve seen illustrated children’s classics and some beautiful books. 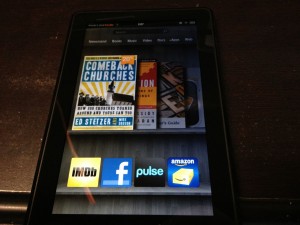 Now that Amazon has a tablet with color screen, it’s become quite clear to them that they need to play catch up in the beautiful book department. For a while some wondered if Amazon would buckle under and add ePub reading ability to their core software (seeing as that the e-Ink Nook reads ePubs, handles fonts, it’s not that much of a stretch to imagine it’s possible to do. But imagining Amazon releasing control of their format was harder).

With the release of the Kindle Fire, Amazon also has announced a new eBook format: KF8. This unsexily-titled new format is actually a heck of a lot more sexy than the name lets on. It allows HTML 5 and CSS. That means eBook designers can make books as beautiful as some websites, more resembling their real life counterparts. And it can more or less keep up with ePub books.

This is a win all around for readers and consumers, and very soon, for Kindle Fire owners who will get to read better presented eBooks.

KF8 isn’t out yet, but thanks to the Kindle Fire, it soon will be.

No word on whether KF8 books will be able to work on older eInk Kindles, though one hopes so.