The latest version of the Amazon Kindle app for iPhone and iPad adds a feature that Amazon first introduced in the Kindle Touch last year and continued into the Kindle Paperwhite.

X-Ray isn’t a big feature for all readers, but it’s helpful for those who like books with large casts of characters like the A Song of Ice and Fire series. With X-Ray readers can keep see how often characters appear in the book, which is helpful is distinguishing the major non-viewpoint characters from the minor characters in George R.R. Martin’s world. 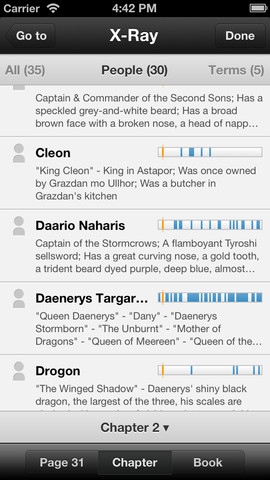 There is a potential for spoilers, however, when a character’s appearances in the book suddenly stop it could mean they died. Or, when one suddenly reappears it could mean they’re not as dead as the writer wanted the reader to think.

Amazon originally developed X-Ray for the Kindle Touch in 2011, and brought the feature to the Kindle Paperwhite and Kindle Fire HD this year. The new Kindle for iPhone and iPad mark the first time Amazon put the feature on a device without the Kindle name. This goes along with Amazon’s theory that it doesn’t matter what device Kindle readers use, as long as they buy Kindle Books.

Amazon still has a number of features exclusive to its Kindle devices such as the new time left per chapter feature in the Paperwhite and Immersive Reading which syncs Audible books and Kindle Books in the Kindle Fire HD. It’s not clear if Amazon will bring these features to other devices in the future, but now it seems likely.