Amazon’s creating quite a stir with the introduction of the Kindle DX. As you’ve probably heard by now, Amazon is partnering with universities and newspapers to push the device to a wider audience. Here’s a roundup of what writers are saying about the $489 Kindle DX.

The $489 price tag is drawing a lot of heat. In a world of multi-function devices is $500 too much for a reader?

Available this summer, there’s no denying itÃ¢â‚¬”the Kindle DX looks fantastic, especially with that surprise landscape/portrait rotational sensitivity we find useful in so many smartphones. But $500? Really?

Adrian Kingsley-Hughes from ZDNet doesn’t like the Kindle DX’s price tag either.

Feels to me like Amazon are chiseling customers a bit. $140 extra for a bigger screen, some more storage, auto-rotate display and native PDF support seems steep to me.

Paul Miller from Engadget likes the new keyboard and the auto-rotate feature. He says he’d choose the Kindle DX over the Kindle 2.

The size difference really is notable. The DX is a large device. It’s not the kind of thing you’ll be throwing into a purse, though it’s not so large that you wouldn’t consider it over the Kindle 2. In fact, if we had to choose right now, the Kindle DX wins hands-down.

A lot of folks are complaining that the Kindle DX will only be subsidized for select New York Times, Washington Post and Boston Globe subscribers.
Harry McCracken from Technologizer wrote:

And here’s something a little weird: If you sign up for a long-term subscription to the New York Times, the Boston Globe, or the Washington Post, you can get a discount off the DX’s somewhat intimidating pricetagÃ¢â‚¬”but only people who live in areas where they can’t get home delivery of the dead-tree versions of the papers qualify. Sorry, tech-savvy locals!

Speaking of dead trees- some writers don’t think the Kindle DX can do a good enough job presenting newspapers in their full glory. Robert Fabricant from Fast Company wrote:

I wish a larger screen could save the Boston Globe. But I doubt that is the case, at least not in the way people are hoping…. The key to the future of news is juxtaposition, brought to you, I hope by the Kindle 4.

I’m not sold on how this will really help the publishing industry, especially at a price nearing $500. I think there’s a market for this stuff, especially textbooks but for print publications, I’m not sure if this can do a lot to turn things around for them.

For books that are available on the Kindle, sales are already 35 percent of the same books in print, up from 13 percent just a few months ago. In other words, if a paper book sells 10,000 copies on Amazon, it will sell an additional 3,500 digital copies on the Kindle. Let me repeat that, digital books via the Kindle are selling at 35 percent the level of physical books 18 months after launch. 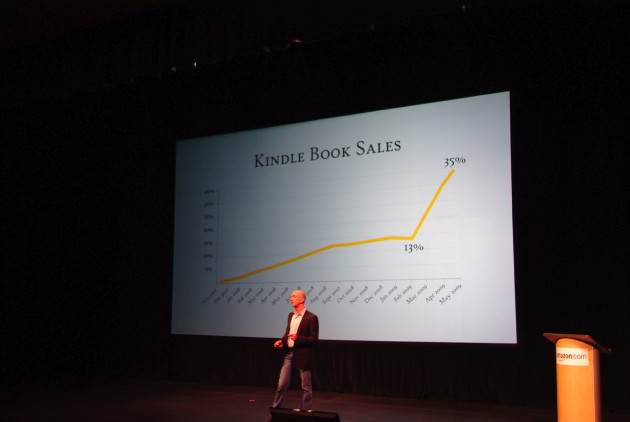