KLIK, a new iPhone app powered by Face.com will recognize faces before users even take a photo.

Like Instagram, KLIK offers filters for photos and a social network for sharing the photos. Unlike Instagram, however, KLIK is all about people. The app uses Face.com’s facial recognition to automatically tag friends in photos while the user is still framing them.

KLIK’s facial recognition relies on user’s Facebook accounts. When a user logs in the app will analyze photos of the user’s friends to accurately identify them in the app’s photos. The facial recognition isn’t always perfect, but the users can “teach” the app faces it doesn’t recognize. Later, the app should identify those friends more accurately.

The app offers “face filters” for photos which accentuate faces. Face.com says these filters are “designed specifically for pictures of people’s faces.” Most users will probably dislike at least a few of the filters, but at least they’re not just a straight copy of Instagram’s filters like most apps provide. 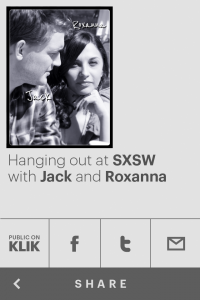 Users can upload their filtered photos to the KLIK app’s own social network or to Facebook and Twitter.

Users’ friends might not appreciate tagged photos of them being published to various social networks, so it’s a good idea to make sure the people in each photo are okay with the photo being published. The app only tags faces with first names, but it still might not be okay with everyone.

Google famously has facial recognition software that it never released due to privacy issues. As a standalone app KLIK might not carry a lot of privacy baggage, but the potential is there if the social network grows and more developers can tap into it.