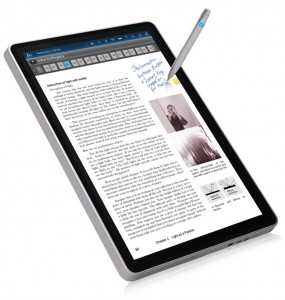 Perhaps best known for flooring us with their giant dual-14.1″-screen tablet (twice), the folks at Kno have announced they’ll be complementing that titan with a half-sized model. And by “half-sized”, I mean that in the most literal way possible.

In addition to rolling out their big double gun, they will be releasing a single-screen model of the Kno. It keeps the 14.1-inch display, but only has one instead of two, as well as all its other features. It will remain an education-oriented device with pen input and custom operating system.

Alexia Tsotsis of TechCrunch got a hands-on with the device (and showed off his impressive portrait sketching skills). While it’s tempting to dismiss the device as a simplified Tablet PC, the fact is getting textbooks on Tablet PCs has been a challenge for years, often requiring the unbind-and-scan solution. If the Kno can make digital textbooks more accessible, more power to ’em. 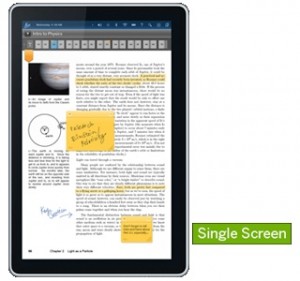 The screen chop addresses my main concern with the original device, which is the awkwardness of handling a device that size. While it beats textbooks in a backpack, based on my experience with a convertible of the same weight and size, the dual-screen Kno struck me as being difficult to use unless laid flat, especially with that fabric hinge. A single-screen slate, while still large, should be much easier to handle. Quite frankly, design-wise, it looks like the 14″ slate I’ve always wanted.

Pricing and release are still undisclosed, though they’re still aiming for under $1000 for the dual-screen and less for the single.