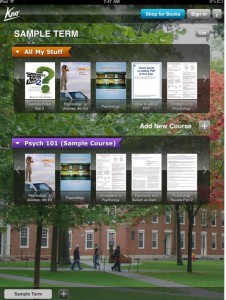 Ever lugged around a backpack full of textbooks? If you have, you’d know that the task at hand can be tedious. Fortunately, with the iPad’s large 10-inch display, students can now reduce back strain by carrying less, thanks to the Kno textbook app, accompanying bookstore, and Apple’s iPad to display all the knowledge that’s found in school books.

The company had envisioned creating its own textbook e-reader hardware in the form of large slates, including a dual-screen model, but exited the market in the wake of heightened competition in the e-reader and tablet spaces. Instead, it is focusing its efforts to create apps to bring the textbook reading experience to other tablets and deliver books to those hardware.

Kno is boasting that its bookstore now houses over 70,000 textbook titles at 30 to 50% off of the list price, so not only will you experience a reduction in weight as you’re walking between classes, but your pocketbook will also be a little heavier thanks to the cost savings of going digital.

The app seems thoughtfully laid out where students can organize books by term and classes. There is a highlighting feature, though the iPad app eschews the handwritten note feature as the iPad doesn’t support for a digitizer like the HTC Flyer or the original Kno hardware, and students can also share passages and selections on Facebook and Twitter via the WTF–Words to Friends–feature.