Earlier this year the company behind the Kno student tablet gave up on the hardware aspect of their business (Intel picked up the slack) and decided to focus on software. A good move, as the best thing about the Kno tablet was the operating system and the robust textbook and learning tools within it. The Kno app launched on the iPad this summer and the developers behind it continue to add new, cool features. One released in the latest update the app’s ability to turn certain portions of textbooks into interactive, 3D models.

The new feature, released this week, takes models of molecules in chemistry textbooks and allows students to enlarge and spin them 360 degrees. This data is not included in the textbook itself, it’s extrapolated from the textbook data by the app — pretty cool. TechCrunch’s Erick Schonfeld posits other possible applications, including blueprints and diagrams. 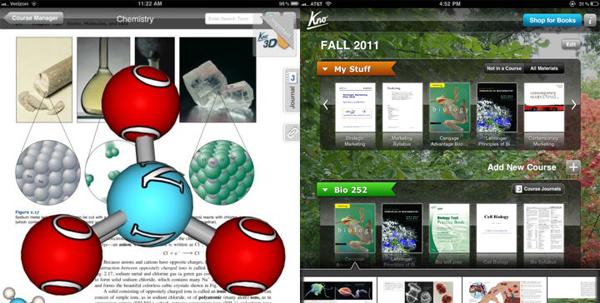 The apps other education-enhancing features include automatically generated quizzes and an Evernote-esque activity stream for notes students make in textbooks. This Journal feature gathers together highlights, text notes, images/phones, audio notes, and (as of this week) video notes from books. The aim is to make studying for tests easier by gathering together just the information students or their teachers have deemed key.

The Kno app itself is free in Apple’s app store because the company is making money from sales of textbooks through the Kno platform. The library has over 70,000 titles at 30% – 50% off list price. I’m looking forward to seeing what other features the company has up it’s sleeve and hoping for an Android version. Check out the demo below from TechCrunch.