It looks like Kodak is joining Sony with the latter’s QX lens camera. The Kodak offering is branded under the PixPro name and comes in two models, an SL10 and an SL25.

Like the Sony QX series, the PixPro SL series is an attachment to your existing Android smartphone or iPhone. The lens clips onto your phone and connects to your phone over a wireless connection to offer you a zoom lens. Your phone display, via an app, would serve as the viewfinder so you can frame your image and see what the lens captures. 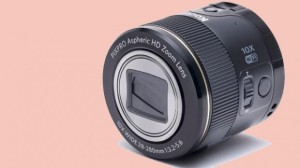 Storage is done through the lens on a micro SD card adapter.

Details are still scarce, though we do know that these lenses will be cheaper than their Sony counterpart. The SL10 will be priced at $199 when it launches in spring 2014 while the SL25 will cost $299.

We still don’t know much about the sensor or the sensor size of these camera lenses.

It’s unclear how popular these lenses would be as they are bulky and connecting to the phone via a wireless connection, be it WiFi or Bluetooth, would be slow for transferring high resolution photographs.