The Kyocera Brigadier is a rugged smartphone that delivers a good smartphone experience at a very affordable on contract price.

Users looking to replace the Casio G’zOne Commando 4G LTE with something a little tougher and more modern need to look at this option. The same goes for users that need to put a Lifeproof case around a Samsung smartphone to comfortably carry their phone at work and play.

The most talked about Kyocera Brigadier feature is the Sapphire screen that is made from Sapphire, which is nearly impossible to scratch. No matter how long I scraped and smacked the screen with a sharp pocket knife there was no damage.

The rugged construction which keeps the Kyocera Brigadier display safely behind a protective lip will also deliver better than average drop protection. 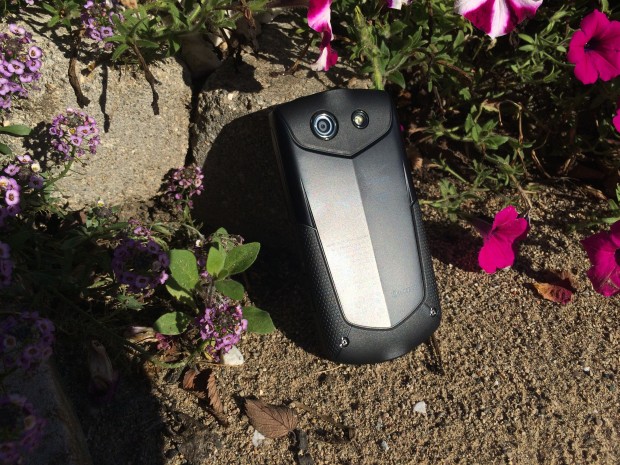 the Kyocera Brigadier is a rugged smartphone on Verizon.

For comparison a case that adds water-resistant features and durability to the iPhone 5s or a Galaxy S5 adds $60 to $80 to the price of your phone for a Lifeproof or OtterBox case.

The four-minute Kyocera Brigadier review video outlines the design, durability and features on the rugged smartphone. 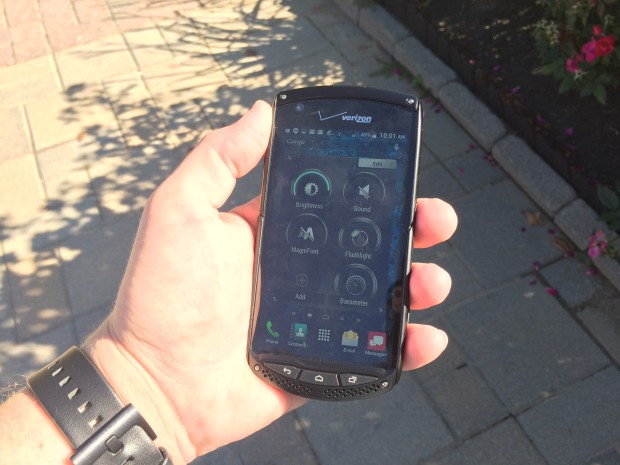 You can use the Kyocera Brigadier in the sun.

Although Kyocera packs in a tough Sapphire Shield display cover there is only a 720P display underneath it, below the standard resolution for phones with a 4.5-inch or larger display. Although the display does not look as nice as the Galaxy S5 it is easy to use outdoors in most lighting as long as you turn the brightness up and it is sufficiently large enough to use while working on some type of outdoor task.

You can use the Kyocera Brigadier screen with gloves on and it works when wet. Most smartphone screens don’t register taps well when there are water drops on the screen and while more models work with gloves it is still not a standard feature. The phone is not designed to use in water, but when it is above water you can still use the screen without completely drying it.

Smacking the screen on a table edge, hacking at it with a pocket knife and after several drops from pocket height the phone survived well.

You don’t need to look at a spec sheet to know that the Kyocera Brigadier is a rugged smartphone. You’ll love or hate the varied texture and thicker design of this smartphone, but it’s not just there for looks. 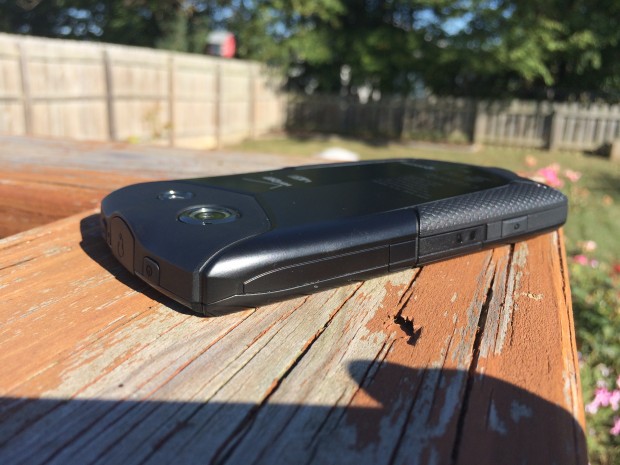 The rugged design helps deliver protection and is easy to grip.

Thanks to a variety of textures and materials it is easy to grip the Kyocera Brigadier even with wet hands. This is one feature that I really like about this phone, as holding a phone with gloves on or in the rain can be tough even in some water-proof cases.

Thanks to sealed ports and the design you can submerge the Kyocera Brigadier for 30 minutes in up to six feet of water. It is also Military tested for shock and dust. During my time with the Verizon Wireless Kyocera Brigadier review unit I tested the phone in pools, hot tubs, and puddles as well as in fine patio paver sand in my backyard. These may not be the same conditions that you will use the device in, but it is a sturdy smartphone that feels like it will stand up to the hazards of working on a construction site, adventuring outdoors and more. 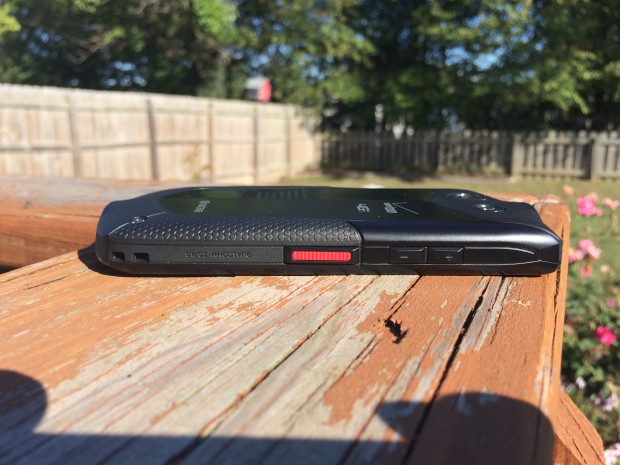 The red button is programmable to open the app or task you want.

There are more buttons than on a traditional smartphone since you may often need to change settings while using gloves or feel for the button your need. The home, back and multitasking buttons are physical buttons, but there are several others. There is a dedicated camera button, power button and a speaker button to activate speaker mode while on a phone call. There is also a programmable button that can wake the screen, activate an app or more. 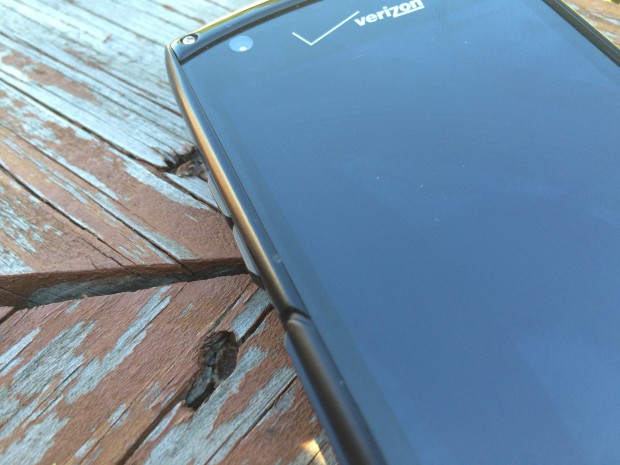 After a drop there is a small scratch on the plastic, but none on the screen.

There is a MicroSD card slot on the side to add storage if the 16GB of built-in storage is not enough.

Many times rugged smartphones are handicapped by slow processors, paltry cameras and old versions of Android, but Kyocera shows that isn’t always the case.

While this device doesn’t blaze past high-end competitors in benchmarks the Snapdragon 400 processor does a great job of delivering a speedy day-to-day use including opening the many included apps and those from Google Play.

I did not experience lag while using the Brigadier and all of my standard Android apps including Gmail, Facebook, Kindle, Chrome and others.

With medium to heavy use while outdoors at the fair or during a labor day weekend pool party, both of which required a bright screen, the Kyocera Brigadier battery life lasted a full day. After coming off the charger around 8AM there was still 20-25% remaining when I was done. While I switched to another device during the review the Brigadier standby time was good still showing some power after two days of no use. You’ll want to charge this phone every night, but it should get through most days. 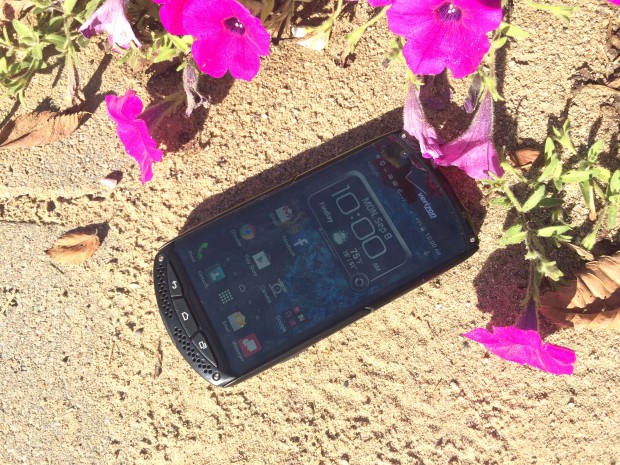 Performance is good, but there are some areas for improvement.

You can not swap out the 3,100mAh battery, but it supports wireless charging with the QI standard so you don’t need to remove the charging port cover every time you need to charge the phone.

Call quality is OK, and will vary based on your location and coverage. Callers did not sound as crisp and voices were not as full as on competing smartphones. Speakerphone is surprisingly loud and still delivers good quality at max volume. The phone supports using voice and data at the same time so you can be on a phone call and use the Internet.

While listening to music or watching a video the front facing speakers are certainly loud enough, and deliver decent quality at the same time. You’ll still need some good headphones to go with this device for extended periods of listening, but it is loud enough to handle day-to-day needs like watching a TV show at lunch or listening to music while you work outside.

The Brigadier cameras are OK, but like the 720P display they are another area where Kyocera held back to keep the cost down. A rear facing 8MP camera and a 2MP front facing camera both sound impressive, but the quality is not up to par with the Galaxy S5 or iPhone 5s.

The rear camera focuses and takes pictures quickly, so most of my shots are in focus, but the overall look of photos don’t match the colors of real life. As you can see in the sample photos below those in dim light leave a lot of noise and grain in the photo.

The camera is capable of 1080P video, delivering mixed results. I was not able to get a good video while the shooting toward the sun, but other times it delivered very nice looking video. The sample below shows this issue.

The Brigadier runs a special version of Android 4.4.2 customized with a Kyocera skin, apps and features that add some value to the device. This is close to the current version of Android, although not the latest.

The lock screen includes a number of widget options including a compass, sunset/sunrise, flashlight and weather information. Swiping up allows users to launch to the home screen, camera or phone. The Kyocera branded features like the lock scree a widget for fast access to special features and even the Settings menu are a little bigger making it easier to hit with gloves on. 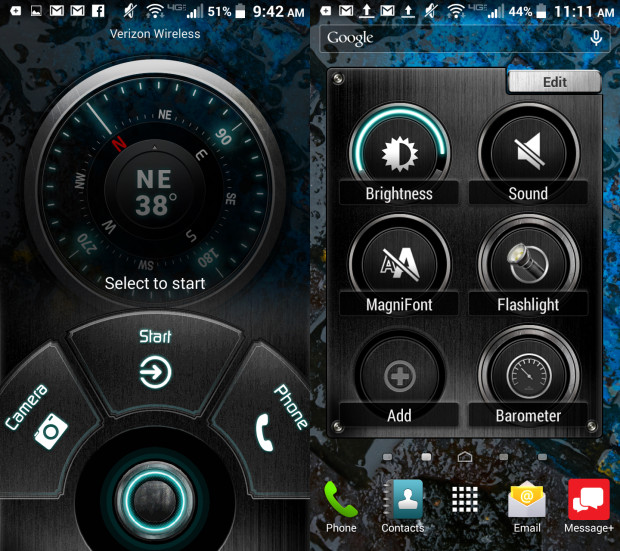 There is a widget that offers fast access to sound, brightness, flashlight, barometer and a font increasing option as well as other shortcuts to simplify use. Kyocera also includes an eco mode that conserves battery life. Users can turn this on manually or set it to automatically turn on when needed.

Verizon includes several Verizon apps as well as Amazon apps with the device. There are not that many Kyocera apps, but there is a built-in barometer app and settings to extend battery life and change the programable button on the side of the device.

Should I Buy the Kyocera Brigadier

You’ll need to live with a 720P display and cameras that aren’t the best, but even with those trade-offs you end up with a very capable smartphone at an attractive price.