The Kyocera Hydro is a new Android 4.0 smartphone that brings heavy-duty waterproofing to a mainstream smartphone.

Unlike the many ruggedized smartphones for construction, police and outdoor activity enthusiasts, the Kyocera Hydro is going to be priced and positioned as a smartphone for the average user that is also waterproof.

The phone is certified IPX 5 and IPX 7 waterproof. IPX 5 means this phone can survive sprayed water like rain, but the real benefit is in the IPX 7 certification. This means the phone can be submerged in up to 1 meter of water for up to a half an hour and continue to work. Typically we see this feature on phones that are bulky and rugged looking, but the Hydro looks like many other budget Android phones.

Watch Chuong Nguyen take a closer look at the Hydro at CTIA 2012, where there was unfortunately no water on hand to test it out. 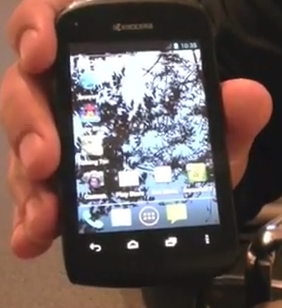 The Kyocera Hydro is a mass market phone with mediocre specs, which leads us to believe it will arrive as a sub-$100 phone when it hits carriers this summer. There are no official announcements, but my money is on AT&T and or Verizon.

The Hydro runs Android 4.0, but includes a capacitive menu button, so that users won’t face such a change when they upgrade to the phone from an older Android device. This also means less hunting for the menu placement on-screen.

The 3.5 inch IPS display looks like it has good viewing angles, even if it looks a bit small. The 3.2MP rear facing camera is a bit of a let down, even on a budget device. Inside a 1GHz Snapdragon processor powers the phone and the experience.

The waterproofing is not nanotech like HzO, which impressed with submerged smartphones at CTIA, but relies on gaskets, seals and special waterproof screws to keep the water out. There’s even a GoreTex fabric in the speaker that prevents water from entering and ruining the sensitive parts of the phone.

Look for the Kyocera Hydro later this summer.