LaCie’s expandable storage accessory for iPad, called the Fuel, has received a generous storage boost from 1TB to 2TB.

The Fuel was first unveiled at CES 2014 earlier this year, but was capped at 1TB. While that’s more than enough storage for most casual users, LaCie knows that there are quite a bit of iPad users who could easily want 2TB of storage for their iPad media.

While iPad apps can’t be stored on the LaCie Fuel, users can squeeze as many movies as they can onto the iPad sidekick. In fact, LaCie claims that “users can go from 20 movies on a 32GB iPad to over 1,000 movies on the Fuel,” allowing you to pretty much take your entire movie collection with you wherever you go. 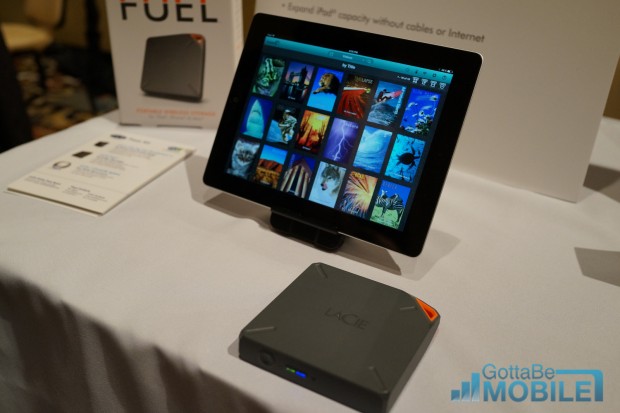 More than just casual movie watchers, though, professionals can also take advantage of some extra storage. Photographers, videographers, journalists, etc. can use the 2TB of storage to take all of their photos and videos on the go, or simply just use it as a storage solution until they get back to the office.

The 2TB LaCie Fuel will be available sometime next month for $249, which is certainly a bit steep for a 2TB hard drive, considering that you can get them for under $100 these days, but the added cost includes the Fuel’s ability to connect with your iOS device, as well as your computer, making it a unique storage option that not just any regular hard drive could accomplish on its own.

The LaCie Fuel can also connect with Dropbox, so any files you put in Dropbox would show up on the LaCie Fuel drive. The device also has a native USB 3.0 port for faster data transfer between the drive and your computer.

LaCie said initially that a 1TB version would cost $199, but we’re not sure if the company plans to keep a 1TB option available as the entry-level model, or simply just sticking with the 2TB version as the only option.