LaCie unveiled the 5big, a RAID storage solution that features Thunderbolt transfer speeds and up to 20TB of storage capacity. The solution is fast to meet the needs of video producers and others working with large files.

The 10TB model costs $1,199, while the 20TB model costs $2,199. Most people will never actually want to spend that kind of money on a storage solution, but it’s within many creative professionals’ budgets. Puny internal notebook hard drives and SSDs just won’t do when they’re importing dozens of photos at a time and trimming down terabytes of video into feature-length documentaries. 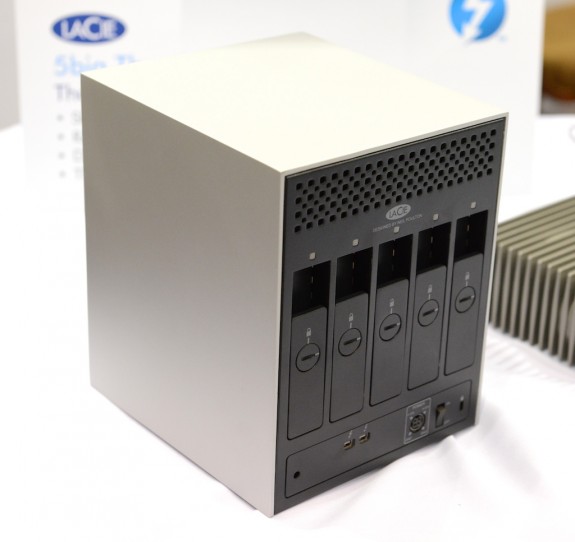 LaCie is marketing the LaCie 5big for Macs only. While there are a handful of PCs that support Thunderbolt, Apple’s the only company to go full steam ahead with the ultrafast standard. All current Macs ship with at least one Thunderbolt port.

As its name implies, the LaCie 5big is loaded with five big hard drives, each with 2TB or 4TB of storage capacity to be exact. The 7200 RPM hard drives are configured as RAID 0 to protect against data loss, which means that users will only be able to store 5TB or 10TB.

Lacie claims the 5big has transfer read speeds of up to 785MB per second, which is enough to simultaneously stream four uncompressed HD videos over a single Thunderbolt cable. Data can write to the drives at 695MB per second.

The drives can be easily replaced in case of drive failures or when users run short of drive capacity. Users can also daisy chain up to five additional drives if 20TB isn’t enough.

The LaCie 5big is similar to the Drobo 5D in that it both rely on Thunderbolt connectivity and five hard drive bays. However, the Drobo system is more expensive, starting at $849 for the Drobo 5D with no hard drives. Drobo sells a 6TB configuration for $1,249 and a 15TB bundle for $1,849. Some people will prefer the Lacie system because it uses standard RAID formatting rather than Drobo’s proprietary system.

Lacie also announced the 5big NAS Pro at CES 2013. It looks nearly identical to the Thunderbolt RAID, but users must connect to it over a network and not through Thunderbolt. It’s designed for collaboration and shared storage rather than raw performance like the Thunderbolt model.

The Lacie 5big Thunderbolt RAID is available to order from Lacie.com now and we expect to see it available through professional camera and video stores shortly.