Laptops have become the default PC form factor. After surviving an onslaught of low-cost netbooks, the laptop today is in most cases just as powerful as a desktop computer, with users having the appreciating the benefit of packing up and heading off to the local café when they’re ready. Laptops aren’t just what most companies issue their employees, they have come to define a new generation of mobile-first users who want to work and play anywhere they see fit.

Whereas the netbook, small low-cost laptops with really poor processors, failed to overtake notebooks and laptops, the tablet is a different animal all together and it shows no signs of slowing its ascent to the mobile computing throne. Whereas the laptop is fairly rigid, tablets can be purchased with accessories and add-ons that make them suitable devices for almost anything.

So is a laptop or tablet right for you? Of course, that depends on your specific use case and what type of device you’re looking to pick up. 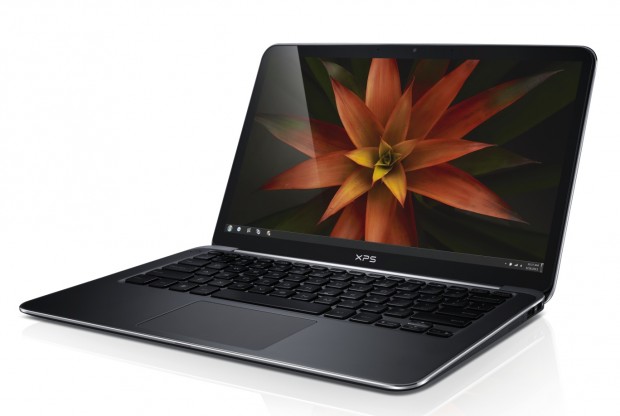 The Dell XPS 13 Ultrabook has a 13.3 inch display, but is the same size as most 11 inch notebooks. It’s great for anyone who likes traditional form factors.

The laptop is still the king for users who want raw power, that is users who want to run demanding apps like Photoshop or edit videos are still better off purchasing mid-range laptops. That’s because laptops typically offer processing power that’s far superior to what typical tablets have. It’s not that the tablets aren’t catching up, it’s just that not all tablets have caught up.

It’s probably helpful to use the truck and car analogy that Steve Jobs made famous a few years ago. The laptop is like a truck in so much as it has specific use cases. They’re sometimes big and bulky but you wouldn’t want to try and haul furniture – in this case large apps and games – on anything else. At least for now, laptops are where the productivity action is.

Buying a laptop isn’t just going to get you more power, it’s also going to keep a bit of money in your pocket. A decent laptop that’ll last for two years can be purchased for about $500 to $600 dollars and because everything you need is right there – touchpad, keyboard and screen – there’s no added costs to make them usable.

Finally, laptops are great for users who feel they might want to make very small upgrades down the road. Firm’s like Best Buy will add more RAM and more storage space to customer’s laptops if it’s possible. That means you could slowly upgrade a moderately priced machine with a faster or more spacious hard drive down the road. That is to say, you can buy a laptop you like and make any upgrades you feel are necessary later and save on the immediate cost of buying a new machine. 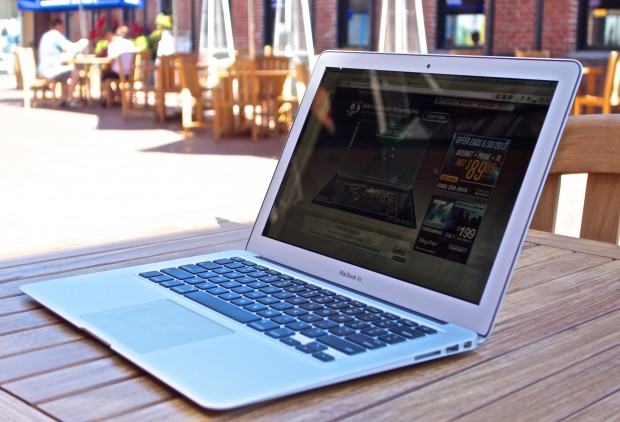 Unfortunately, there are disadvantages. First, many laptops have become very thin over the last few years. Because of this, more and more laptops don’t include a way to upgrade their memory or storage space after they’re sold. As such, you’ll want to look into this before deciding on a laptop to purchase.

Displays are another potential issue. Most laptops start with screens around 13-inches. This makes them decidedly less portable than a tablet would. Again, it’s something to be aware of.

Notebook buyers still get all of the hassle that comes along with owning a PC or Mac. On Android and Windows virus programs must be maintained and failing to do so could cost you your files. They’re also more complicated to use than tablets.

Notebook battery life has steadily improved over the last few years, but they’re still no match for a modern tablet. Whereas tablets can often last 10 hours just playing back video, you’re more likely to get around four or five from a $500 to $600 notebook. 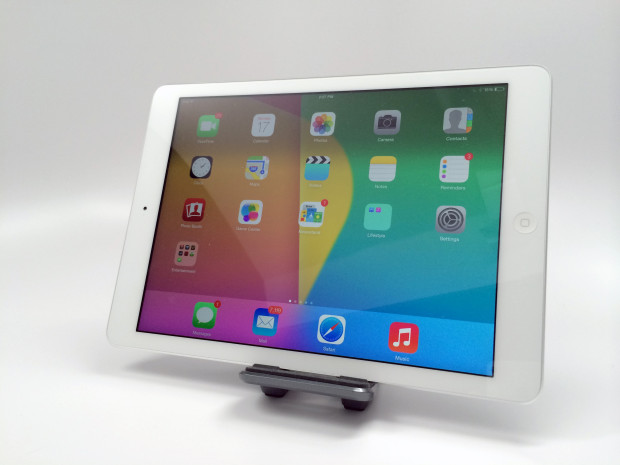 Apple’s iPad Air is the gold standard of tablets and includes the world’s most well-stocked app store.

On the opposite side of the spectrum are tablets. Tablets are like a precision instruments. Most of them users mobile processors and operating systems that were meant originally for smartphones. Because of this, they’re great on battery life and allow users to check their email or browse the internet pretty effortlessly. They also come in sizes as small as 7-inches. As such, users can pick up devices with smaller screens if they’re looking to keep their laptop or desktop but want an entertainment device. In fact, with a few exceptions, tablets are meant to be “light” portables: safe devices that allow you to do things without the hassles of Mac OS or Windows. If that sounds like what you’re looking for than a tablet is what you want. Apple’s iPad Air fit into this category.

Tablets are great media consumption devices. That is, if you’re buying a tablet you’re most likely expecting to use it for browsing the internet or watching the latest movies on Netflix. That’s great since users get longer battery life with a tablet than they typically do with laptops.

Tablets are also better for casual users because of that lite software I mentioned earlier. Tablets usually run iOS, Android or Windows RT. All of these operating systems are made to be safer and require less up-keep than a typical PC. iOS and Windows RT don’t require users to purchase and update virus protection programs. 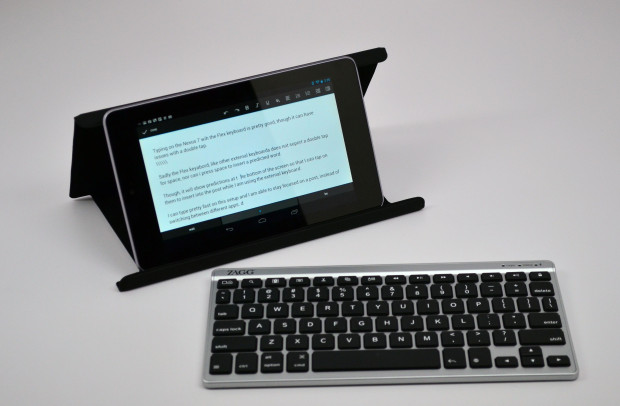 Google’s Nexus 7 tablet is great at multimedia. Users can also pair it with a stand and Bluetooth keyboard for productivity.

Users can securely purchase or download more free apps directly to their tablet without worrying about them being infected with virus since users can only install apps from Microsoft and Apple’s individual app stores. The Google Play Store that Android users have access to is open and sometimes malware does sneak in. Fortunately, apps like Lookout security sweep do a great job of ensuring that nothing dangerous ends on on Android tablets. While we’re on the subject of apps, it’s important to remember that tablet apps aren’t usually as fully featured as the apps you’d find on a notebook.

The best part about buying a tablet is that it can literally be turned into anything with just an added accessory. For example, there are tablet Bluetooth keyboards that can be used to turn them into the ultimate productivity tool. The iPad itself even has camera add-ons to make it the world’s most portable recording booth.

Read: The 3 Things You Need To Look For When Buying a Windows 8 Tablet 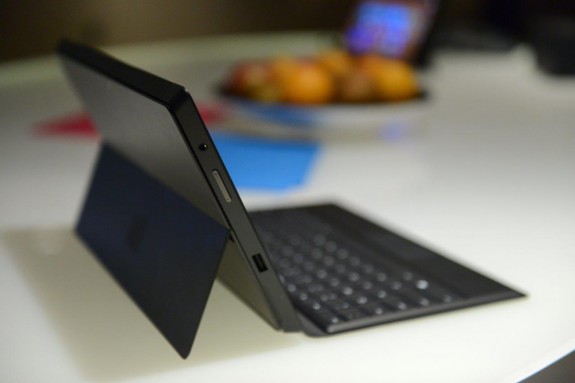 The Surface Pro is a 2-in-1 that has the power of a notebook but the form factor of a tablet. That makes it a great all-in-one device but a really thick and low on battery life when compared to a real tablet.

Finally, there are those things in the middle. 2-in-1s, are fairly new to this generation of devices. Lenovo’s Yoga 2 Pro devices allow users to get work done with a notebook mode and then collapse the display to use it as a tablet. Microsoft’s own Surface Pro is really a powerful laptop that’s been dropped into a tablets body. Users can add a keyboard to it, but it can become whatever users need through accessories.

2-in-1s come with the advantages of both tablets and notebooks. Typically they’ll have the form factor of a tablet, allowing users to easily enjoy their favorite movies and websites with touch like they would on an iPad. They sometimes boast better battery life than a typical notebook. When users a done watching something they can plug in an included keyboard or battery pack and instantly get work done.

Unfortunately, 2-in-1 also share the disadvantages of notebooks and tablets. 2-in-1s require users to put up with more bulk since they have the heart of a notebook. This means that they’re thicker than normal tablets. Some manufacturers do offload the keyboard into a separate attachment that users have to purchase separately. In those cases users get a 2-in-1 that looks almost like a tablet, however they have to buy and purchase attachments to get more functionality. 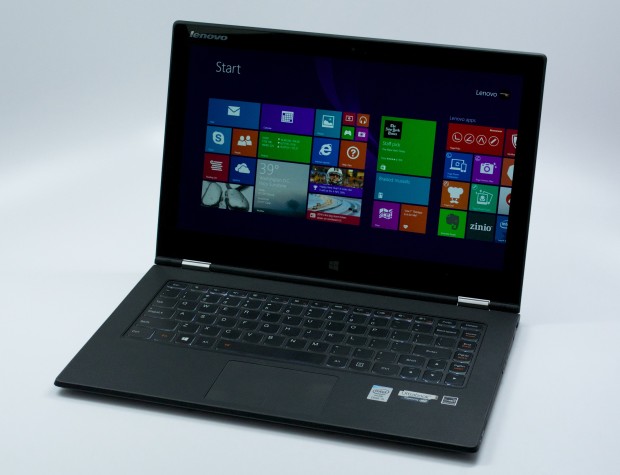 The Lenovo Yoga 2 Pro’s keyboard can be folded back so that buyers can use it’s touchscreen more easily.

They also come with the same security risks that notebooks and desktops do. That means that 2-in-1 buyers do run the risk of getting a virus if they don’t maintain updates and have some kind of antivirus installed. That’s a big minus since a lot of buyers look into tablets to avoid the hassle of virus and virus protection.  2-in-1s running Windows have virus protection included, but that doesn’t mean that users are as safe as they would have been if they’d have purchased an iPad or a Windows Tablet. This also means that 2-in-1 users get the convenience of having mission critical Windows apps at their finger tips.

The bottom line is to consider what tasks you need to do with the device and then purchase what’s right for you.