In a hyper-connected society, keeping up and up to date with each other is becoming an overwhelming chore, especially with the amount of over-sharing on social media sites such as Facebook, Twitter, and Google+. Google, no stranger to trying to keep things automated with services like Google Now and also keeping people in touch with its Gmail service, is working on a way to automate your presence on social media sites like Facebook. Thanks to a new patent application, whenever your friends post an update, Google could send an auto-reply to make it seem like you’re a good friend, always on top of your friends’ business.

In its patent application, Google would leverage open APIs from popular social networking sites to tap into the conversations that are happening. This way, if your friend posted that he got a new job, your Facebook account, thanks to Google, would be able to send an automated message to congratulate said friend on that new job.

Google says that as users subscribe to “”many different social networks,” it is “easy for a person to miss such an update,” and an auto-reply as such would hep fill the plug. However, it may be awkward if you meet said friend later, after sending an automated congratulatory note on social media, and appear clueless as to the new job in person.

Auto-reply is nothing new. Users have been using auto-reply in email services for a number of years now to alert those who send them messages that they’re unavailable, on vacation, or away from their desk as a way to let senders of emails know to expect a delayed response. Google’s latest innovation is a little different in that it’s more intelligent and takes into account the context of the social network posting to provide a contextual response, rather than just an out of office message that’s typical of most auto-reply systems on emails. 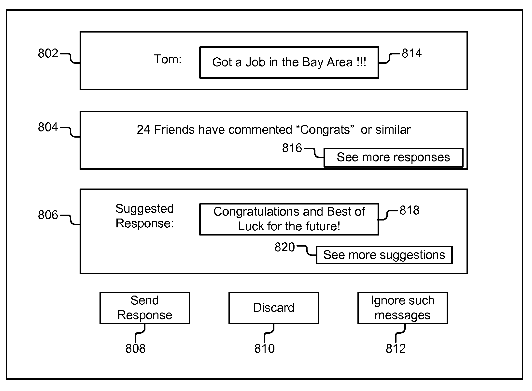 And while Google’s invention may make it appear like you’re on top of your social networking updates, it may provide a lot of benefits to Google as well as it attempts to collect more data and information from its users. This data, however, could be put to good use by Google as it builds on its digital assistant service called Google Now, which displays relevant updates and information to users. By knowing more about a person, Google Now could then deliver more personalized and meaningful content–the service already scans emails to deliver boarding pass information, package tracking for delivery, and more. Knowing what your friends are posting on rival networks could allow Google Now to alert you to important milestones in the lives of your loved ones, even if they don’t use Google services.