Next month RadioShack will announce its own MVNO carrier on Cricket’s network called RadioShack No Contract Wireless, and a new leaked document breaks down the plans for the service.

According to Engadget, RadioShack No Contract Wireless plans will start at $50 per month for smartphones and include unlimited talk and text. The base smartphone plan only includes 1GB of data, however, and excludes features like visual voicemail and tethering.

The highest plan for smartphones on RadioShack’s network will cost users $60 per month. The extra $10 gets users 2.5GB of 3G data, the ability to tether, and visual voicemail. Both smartphone plans include full song downloads and ringback tones. The music features use Cricket’s Muve Music service. 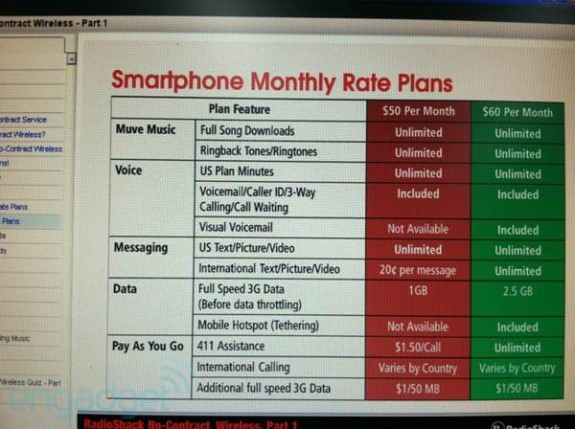 RadioShack No Contract Wireless also has plans for feature phones. The base plan includes 300 minutes for $25 per month, $35 per month will get users 1000 minutes of talk time. Both plans include unlimited SMS/MMS messages and unlimited 1X mobile web. Every minute users use over their plan will cost $0.05.

The plan pricing isn’t bad, but the small data caps aren’t a welcome sight. One of the big draws to other prepaid mobile carriers is the option for unlimited 3G data (MetroPCS even offers unlimited 4G LTE data). Without unlimited, un-throttled data, RadioShack is less appealing compared to similarly-priced prepaid carriers.

RadioShack is entering a crowded prepaid market with high-end phones like the iPhone 4S and competitive pricing.  It will be interesting to see if consumer show interest in the new pre-paid carrier. Without the ability to differentiate on price or coverage, it will come down to what phones Radio Shack offers.