While the Windows Phone 8X by HTC is the Microsoft Nexus-equivalent for Windows Phone, there are now rumors that HTC may be working on its own flagship Titan III smartphone with even better specs and a larger display. Mention of the ‘Titan III’ moniker began appearing on an Xbox Live Rewards survey in December giving renewed hopes that HTC may have yet another phone in its Windows Phone 8 arsenal that is yet to launch. 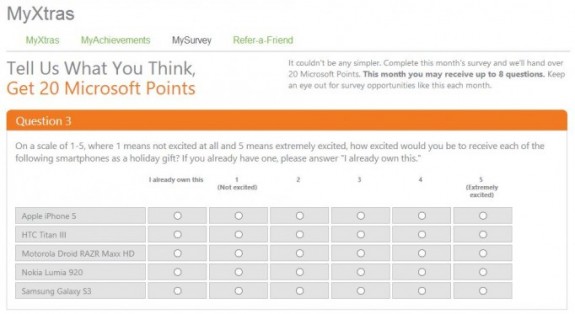 The survey was posted originally on WP Central.

Is the Titan III the Rumored HTC Zenith?

The leaked Titan III as part of Microsoft’s survey may not be surprising as a prior leak of HTC’s Windows Phone 8 lineup was comprised of three devices, the HTC Rio, the HTC Accord, and the HTC Zenith. Based on what HTC has launched so far, we can gather that the HTC Rio debuted as the HTC 8S while today’s flagship HTC 8X (also referred to as the Windows Phone 8X by HTC) is actually the HTC Accord. That leaves the Zenith unaccounted for.

Those leaks posited that the Zenith would have a large 4.7-inch 720p HD display with Super LCD 2.0 screen technology, potentially a quad-core CPU, and an 8-megapixel camera. The given large display size would mesh well with what HTC had done in the past with the Titan lineup. Interestingly, though, the Titan II’s 13-megapixel camera would eclipse the 8-megapixel rumored shooter on the Zenith, at least on paper.

Initially, the Zenith was speculated to launch by Christmas, but given that the device didn’t appear alongside its rivals at the Windows Phone 8 launch even in San Francisco, California, chances of it launching this year are slim. Another potential debut date for the Zenith may be in early January at the Consumer Electronics Show in Las Vegas. This is the same event that debuted the HTC Titan II, one of the first 4G LTE Windows Phone 7 devices alongside the Nokia Lumia 900, and the Titan III could succeed the Titan II on the one-year anniversary of that device.

Still, neither Microsoft nor HTC has announced the device and we’ll have to wait and see if it does launch or if plans for the Zenith were cancelled. AT&T, the U.S. carrier for the Titan II, already has three Windows Phone 8 smartphones in its lineup and it’s unclear if AT&T would be open to adding a fourth for a platform that still has a relatively small market share.