A leaked press photo shows the 6.3-inch Galaxy Mega phablet from Samsung with branding from wireless carrier AT&T Mobility suggesting that the phone may be coming to the U.S. The device will be among the largest phablets on the market to date, with only the 6.4-inch Sony Xperia Z Ultra beating it in the size department.

Interestingly, the image leaked by Twitter‘s infamous @evleaks show the device with a date of Friday, August 23 on the display, suggesting that AT&T and Samsung may be looking at that date to launch the device.

Coincidentally, August 23 is also the date for the launch of the Moto X, which will launch with the Moto Maker design studio launching with a limited time exclusivity for AT&T Mobility. 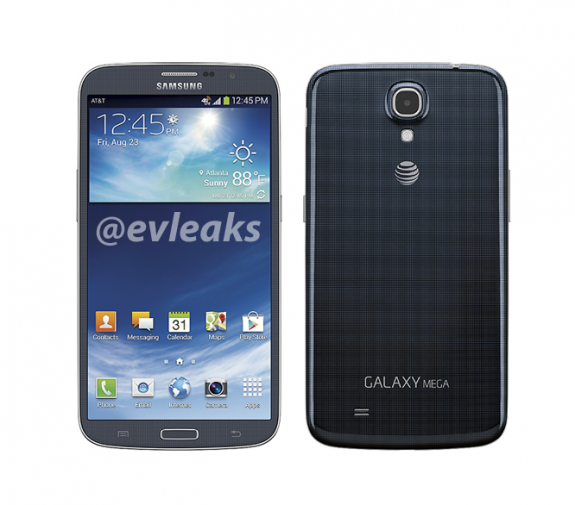 And though the display of the Galaxy Mega 6.3 is large, the device will stick with a 720p HD Super Clear LCD panel, rather than the 1080p full HD Super AMOLED screen of the 5-inch Galaxy S4 smartphone. The Mega will be powered by a dual-core Snapdragon 400 processor along with 1.5 GB RAM and 8 GB of storage. It will have a rear-facing 8-megapixel camera and a front-facing 1.9-megapixel shooter for selfies and video chats. The phone will launch with Android 4.2.2 and is show with Samsung’s TouchWiz UI, also known as the Nature UX.

Right now, specifics on pricing and a launch date is unknown. It’s unclear if the phone will launch on the August 23rd date that’s shown on the display, or if other issues may have pushed back the launch.

Samsung will also be debuting new smartphones in a few short weeks at the IFA trade show in Berlin. At a scheduled press event on September 4th, Samsung is widely anticipated to be debuting an improved Galaxy Note 3 with a 1080p HD display and a Galaxy Gear smartwatch. The Galaxy Note 3 would be positioned as a more premium product whereas the Galaxy Mega will be an affordable product for those who prefer a larger screen.