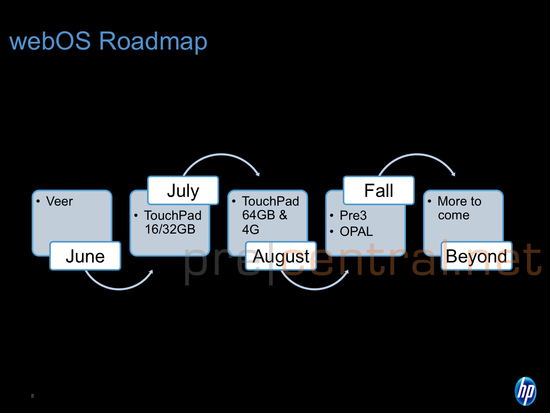 A leaked HP webOS product roadmap revealed some interesting tidbits about HP’s plans with webOS as far as products go. The company is looking to release a 64 GB white TouchPad model this August with a bump in processing speed alongside a 32 GB 4G HSPA+ model for AT&T’s network. It’s unclear what chip will grace the 64 GB white model, but there is speculation that HP could be utilizing Qualcomm’s dual-core 1.5 GHz Snapdragon ARM chipset on that model. The AT&T version of the TouchPad, however, will be similar to today’s 32 GB variety but will add in the HSPA+ radio.

It’s unclear if the processor speed bump will help HP much. Currently, with the TouchPad’s mixed reviews, early reviewers criticized HP for the plastic build quality, lack of apps, and design as speed wasn’t a major concern.

Also of note, HP is looking to launch its codenamed Opal tablet this Fall. Opal is believed to be a smaller 7-inch variant of the current 10-inch TouchPad model.

Additionally, while the Palm Pre 3 is expected to see a release in Europe in late summer, the latest webOS smartphone may not debut in the U.S. until Fall. The Fall release date would be later than the July launch of the Pre 3 speculated for AT&T and Verizon Wireless in the U.S. market.