With each passing day we seem to learn something new about the upcoming iPad 3. If not something new, then we see something that can make those rumors a bit more concrete.

Today there’s some leaked parts which could confirm some of the iPad 3 rumors that have been floating around recently.

Today’s leaked parts come out of Japan, from a blog called Macotakara, and they include a back plate, dock connector, and a Sharp LCD display. The back plate looks very similar to the iPad 2’s aluminum back with curved edges. However, it is 1mm thicker than the iPad 2’s back plate. That small amount of extra thickness could be used to house a larger battery, one that will be needed to power the rumored Retina Display. 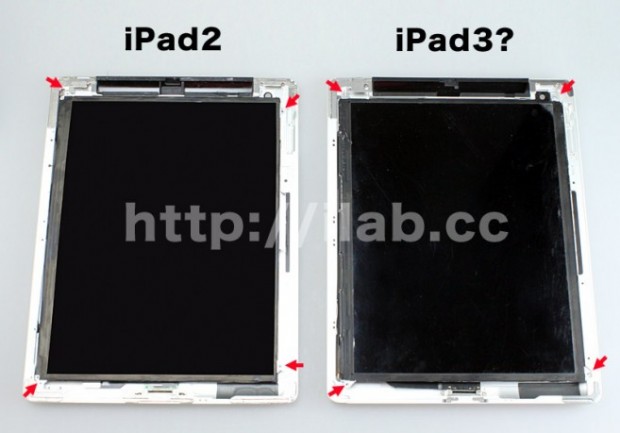 The Sharp LCD display could be the display that sits on top of that back plate. For one, it fits perfectly with the mounting screws on the back plate, and has the same physical measurements as the iPad 2’s display. The Sharp display has a resolution of 2048×1536 pixels, which is four times more pixels than the iPad 2’s 1024×768 display. That’s the sort of resolution that has been rumored since before the iPad 2 was released. The display also has a dual-LED backlight system, which is needed to keep the same screen brightness as the previous two iPads.

The leaked parts also point to the possibility of better cameras in the upcoming iPad 3. The new cameras would be more similar to the ones found in the iPhone 4S. The rear-facing camera could shoot 5MP images, and shoot 1080p video. However, the new cameras aren’t nearly as concrete as the back panel and the screen seem to be. Still, with a screen that measures 3 megapixels, it wouldn’t make sense to keep the same iPad 2 cameras.

Right now the iPad 3 is rumored to launch in the first week of March, with a release sometime soon after. If these rumors are true, it will be a huge step up from the iPad 2. A Retina Display will mean that it will be harder to pick out individual pixels in the display, which will be great for reading, gaming, and just about everything you can use an iPad for.

For more on the iPad 3, check out What to Expect from the iPad 3.