Yesterday we saw a couple of back covers that are likely parts for the iPhone 5, today we have a schematic that seems to match up with those parts.

The schematic comes from Cydia Blog which received it from an unnamed source. The document shows an iPhone 5 that’s a bit taller than the current iPhone 4S. The iPhone in the schematic looks to have a taller screen and taller design than the iPhone 4S. The text surrounding it is in Chinese and badly pixelated English, making it difficult to decipher.

The image seems to line up with the back covers from yesterday. In addition to the taller looks, it appears to show a space for the smaller dock connector on the leaked parts. 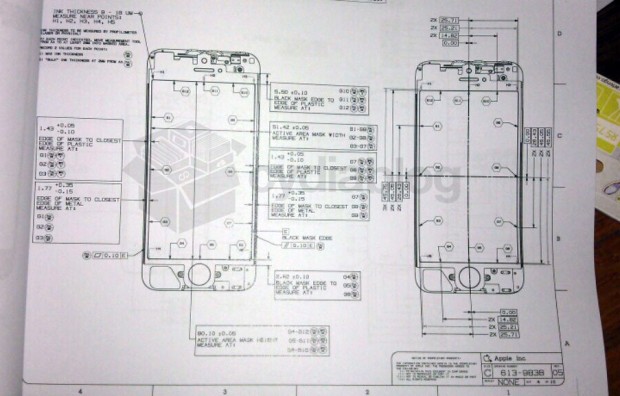 We’re taking this rumor with a grain of salt for now, until we see something that proves it true. We almost hope that it is true, if only so it proves the back covers from yesterday were the real deal. An iPhone 5 with a larger screen and back made of aluminum and glass sounds like a nice step up from the current iPhone 4S.

Other iPhone 5 rumors include the possibility of 4G LTE, a new Maps app in iOS 6, and a release date sometime in the fall. Apple will likely have something to announce about iOS 6 at WWDC in two weeks, though we don’t expect to hear about the iPhone 5 for another few months.

Apple already has Mountain Lion and the new rumored MacBooks for on tap for summer, it wouldn’t make sense for the company to refresh most of its products all at once.