Leaked Photo of Samsung Tablet Being Released at BUILD 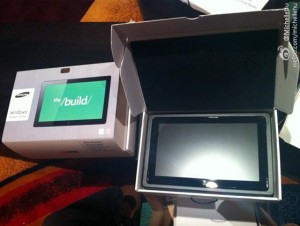 Well, the rumored Samsung tablet to be handed out at Microsoft’s BUILD has been spotted, confirming both manufacturer and venue, as well as confirming that there is Intel inside.

The leak sprang from weibo.com (translated) (before reaching MobileTechWorld and ThisIsMyNext). In addition to the photo, there are YouTube videos, but these have now been marked as private. Before going private, the videos revealed a keyboard and some sort of dock. Also shown was the Intel logo on the box.

However, the only thing unique about this tablet may be the fact that it’s preloaded with Windows 8. MobileTechWorld notes the form factor and accessories appear similar to the Samsung Series 7 slate. Of course, we’re still waiting on that one to be released, so it would still be quite a deal for BUILD attendees to get their hands on one today.

Update: Samsung Series 7 was confirmed as the model at the keynote, but the developer model features additional sensors not previously recognized by Windows and 1 year of mobile broadband from AT&T. Windows 8 will support seven sensors: accelerometer, inclinometer, gyrometer, compass, ambient-light, orientation, and simple orientation. More details at istartedsomething.