Ahead of today’s mysterious announcement from Microsoft, gaming site Shifted2u has posted tech specs for a device called “XBox Surface” that specifies a “Tablet Computing Device.” Could this be the Microsoft tablet to be revealed today?

The purpose and appearance of the device is not revealed, but the partial tech specs speak volumes. 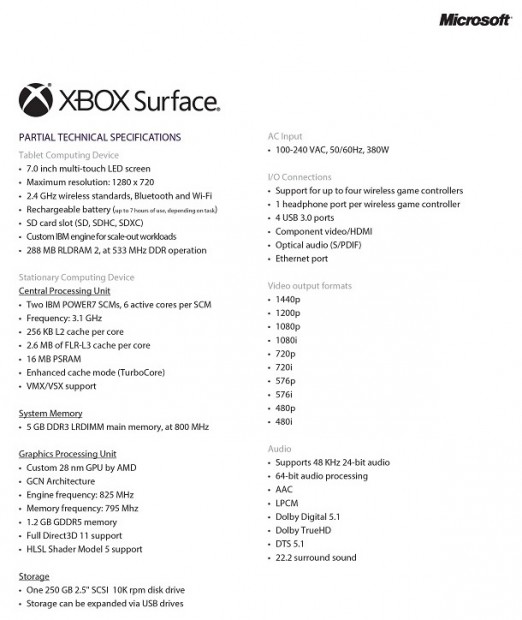 First thing we can infer is this is not the Microsoft Surface we’ve seen trudge along for the past few years. The system described here is two-piece consisting of a tablet unit and a central stationary unit. Furthermore, there is no mention of touchscreen input on the stationary unit, only on the tablet with 7″ multi-touch screen. This implies the touch input part of the device will be farmed out to the tablet companion.

If multiple tablet units can be paired with the same stationary unit, this would fix one sticky problem with the Microsoft Surface concept: how to get multiple people interacting with the same screen. By giving everyone their own display, they’ll be free to interact with it in the orientation they want and without tripping over other people’s hands.

The “Custom IBM engine for scale-out workloads” seems to lend to this notion. Scale-out workloads is a buzz phrase in Cloud computing referring to farming out processing tasks to the cloud. In this scenario, it appears the tablet will farm out its heavy lifting to the stationary unit, which has enough processing power to handle graphic processing duties for more than one 1280 x 720 display. TV output indicates you’ll be able to watch the action on the big screen, while support for wireless controllers indicates the stationary unit will also be able to handle traditional XBox console gaming.

All that is, again, speculation and inference based on this leaked spec sheet. If true, it would put Microsoft in direct competition against the iOS-based gaming system of iPad + Apple TV. In Apple’s arrangement, the iPad handles the major processing while the stationary Apple TV is merely a display device. In this XBox Surface scenario, the stationary unit packs the real power and considerably more of it. The obvious trade-off would be that the XBox Surface tablet will be less capable without the stationary unit, but that would not be a concern for the usual at-home gaming experience. That said, the built-in SD card slot in the tablet implies some level of portability, and it is certainly possible that the tablet could connect to the stationary unit over the Internet via a Wi-Fi hotspot. All I know is, if this is what Microsoft is showing off tonight, it will be a very big deal.