Shortly after news that the LG Spectrum, a 4G LTE smartphone, would debut on Verizon’s network on January 19th, we’re seeing the full details of the Android device through a leaked screenshot of the Verizon Equipment Guide computer software. The leak confirms the January 19th launch date to all channels, and gives us some pretty detailed specs.

The LG Spectrum is essentially Verizon’s answer to LG’s recent Nitro HD on AT&T’s HSPA+/LTE 4G network. Both devices support the faster LTE network protocol, come with a 4.5-inch IPS display with a resolution of 720p, and have 8-megapixel cameras on the rear. 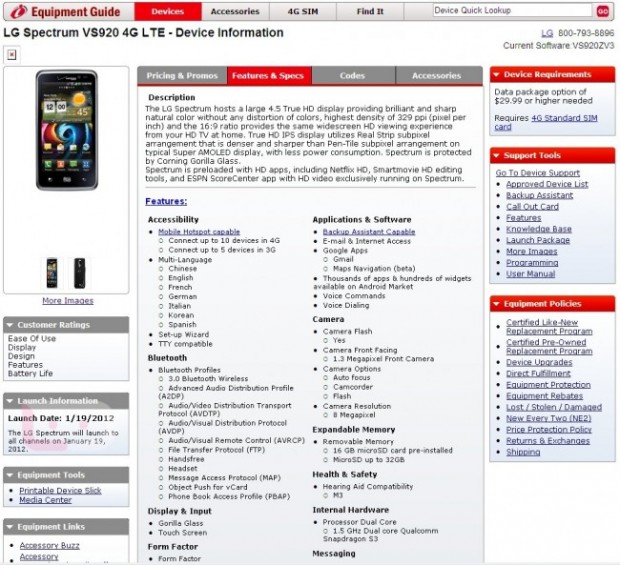 As was leaked before, the Spectrum will have a dual-core Snapdragon S3 CPU clocked at 1.5 GHz. The phone comes with a pre-installed 16 GB micro SDHC card, though users can swap that out for an optional 32 GB card.

With hotspot tethering, the LG Spectrum can support up to ten devices over 4G, or 5 devices on Verizon’s 3G CDMA network.

Tethering allows the phone to share its mobile broadband Internet connection and data plan with other WiFi-enabled devices so you won’t need separate data plans for every device you own to get onto Verizon’s mobile broadband network.

The Spectrum is believed to succeed the LG Revolution, one of the first 4G LTE smartphones to launch on Verizon. At one point, it was thought that the Spectrum would be called the Revolution 2.