Leap Motion is readying a sensor that translates mid-air gestures into precise computer actions. The Leap is a small device about the same size as a smartphone that creates a 3D interaction space in front of any computer’s display.

The Leap is a lot different than the Microsoft’s Kinect system, which is designed to track gamers’ movements when playing the XBOX 360. Kinect does a decent job of sensing gross movements, bit the leap is 200 times more accurate than Microsoft’s device. This means it can sense fine movements, such as finger gestures. It’s even accurate enough to allow users to write with their fingers. The company claims its device is accurate to within 1/100 of a millimeter.

This device can be used to draw in 3D, sign documents, create and manipulate 3D models, and play computer games. 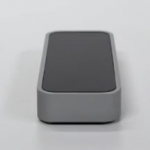 Leap Motion posted an interesting video demo of its technology that focuses on many of the same tasks and use-cases we’ve seen demonstrated with touchscreens for years. The biggest issue with this kind of technology is that users simply can’t keep their hands moving in front of them for extended periods of time. Sure, it can be fun to swipe at a map for a while, but arms and hands can get tired after using such devices after just a few minutes.

The Leap Motion is available now for pre-order for just $69.99, which is in the same neighborhood as a high-end mouse. The relatively low price point will allow users and developers to experiment with motion tracking without breaking the bank.