In the near future users may not even need a touch display to naturally interact with their laptops, PCs, or tablets.

In a new video posted to the company’s YouTube page, Leap’s Leap Motion Controller appears to be able to allow the same user interactions as touch displays, while not requiring the purchase of a machine or display with touch built in. Instead, the Leap Motion Controller would use motion tracking to interpret where a user’s finger is in front of their display. The controller also allows users to perform gestures that have become common place on touch screen devices, like swiping from side to side and pinching to zoom. 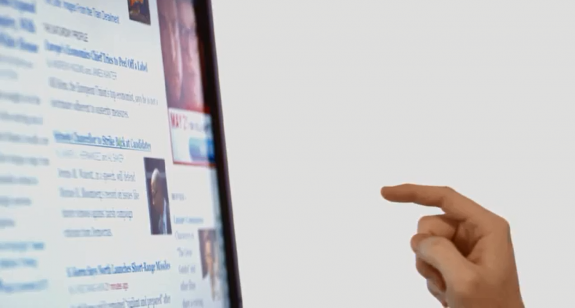 Users with a Leap Motion Controller for Windows would be able to get a touch-centric user interface without the added cost.

In the video, a user’s hand is seen directly interacting with the Metro-style interface on Windows 8. The user is able to completely navigate the entire interface, and immediately dives right into Windows 8’s native applications like Internet Explorer and Netflix. After a brief spell of browsing around, the user is the seen using a drawing app to create a neon-colored picture.

The product could absolutely be a game changer if it was ever embedded into devices. While users can get much of the same functionality using the Air Gesture options loaded onto the Samsung Galaxy S4, that type of technology has yet to become mainstream enough to be included in laptops, tablets and displays. If it was, manufacturers would be able to provide an enhanced touch experience while not having to pass on the costs of touch displays to consumers.