With the success of Minecraft practically unparalleled on any device, it was only a matter of time before another video game studio built something modeled around the success of what developer Mojang pulled off. This week Warner Brothers Interactive Entertainment and toy company Lego announced Lego Worlds, a new Minecraft alternative that aims to be just a bit more kid friendly.

The two companies announced Lego Worlds this past Monday. Developed by TT Games, Lego Worlds is available today through Steam Early Access, a feature of the Steam gaming client for PCs and companion store service. Users can download and test the game immediately, Warner Brothers, TT Games and Lego are hoping to get feedback about Lego Worlds before making it more widely available. 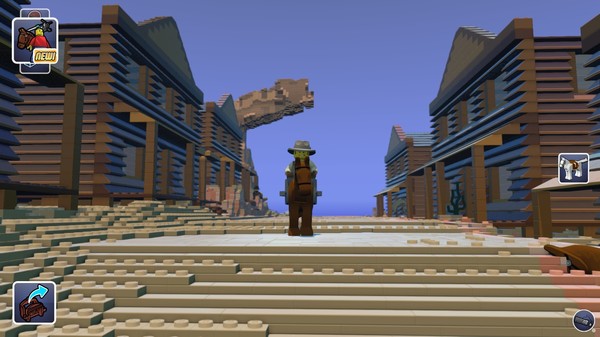 Lego Worlds is a sand box game in the most basic sense. The worlds that players inhabit are completely designed to resemble the real world. They have textures and objects are easily identifiable. Everything and anything in each world is made up of different Lego bricks. That’s where the similarities with Minecraft come in. In Minecraft everything around you is a block. There are a lot of people who play Minecraft because they enjoy defeating creepers. A great deal more people enjoy Minecraft because they like tinkering and creating whatever they can think of. In fact, Minecraft is often described by some as digital Legos.

Lego Worlds is designed to keep the spirit of creation alive within Lego’s own properties. The actual worlds themselves are automatically generated, but players can build whatever they want thanks to a custom brick editor. Lego is even making it easier to customize the terrain in Lego Worlds on a serious basis. There’s a “large-scale” landscaping tool for editing areas quickly. TT Games promises tons of content for users to include in their worlds. Interactions with the inhabitants of different worlds is something Lego Worlds leans on heavily; players can interact with lots of other creatures in each world.

TT Games plans to expand the available themed sets over time. The developer already has plenty of Lego Worlds updates planned. Future updates will add multiplayer and world sharing, according to a press release from Lego.

All told, Lego Worlds appears as if it’ll be a pretty interesting counterpart to Minecraft. The competition certainly couldn’t come at a better time. Microsoft recently purchased Mojang and Minecraft. Having conquered the enthusiast space long ago, the company appears to be moving in some exciting new directions with the game. It’s HoloLens wearable computer actually offered a demo that let users build different things on furniture and tables around them. In fact, some of the promotional materials for Microsoft’s Windows 10 operating system include Minecraft references despite Minecraft not being available in the Windows Store. Right now Minecraft can be a bit confusing to install and maintain. Worse, some Minecraft sandboxes can’t be transported to different versions of the game because of differences in code and modifications.

Right now, it’s unclear if TT Games, Warner Brothers Interactive and Lego have plans to make Lego Worlds available on platforms besides Steam. Presumably, they do because a huge number of gamers only play on gaming consoles like the Xbox One and PS4. It’d also make sense to release a version of Lego Worlds for tablets and smartphones like the iPad and iPhone.

There’s no hard release date for the final version of Lego Worlds just yet. Those who are comfortable participating in the test will need to download the Steam PC client here. They’ll also need a Steam account, which is completely free.