Couple of top players in the Tablet PC market are piquing interest with passing mentions and peeks at lightweight slates they have in the works. A Lenovo exec has been talking about their “LePad” while Toshiba Australia left audiences wanting more with a shot of their slate in development.

Liu Jun, senior vice president and president Lenovo Consumer Business Group, didn’t offer a lot of details except to say their device will be called the LePad and will run Android. The naming convention is in line with their other non-PC offerings, like LePhone. He goes on to discuss how Apple hasn’t focused on the Chinese market, so this could be a strictly domestic venture for them (domestic for them being China-only). Via PC World by way of Gizmodo. 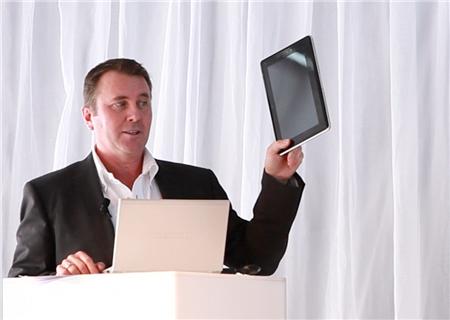 From Toshiba Australia, managing director Mark Whittard offered fewer details but showed off a prototype of their lightweight tablet at a 25th anniversary celebration press conference. Confirmed was that both Android and Windows 7 tablets are in the works. Of course, Toshiba already sells Windows-based Tablet PCs (I have two), so only half of that is news. If this were any other company, I’d assume the slate was to be Android-only and their convertibles will remain Windows-based, but given their experiment with the Libretto W100 dual-screen tablet running Windows 7, I can see them running either or both ways. PC Authority via Netbook News.