The Lenovo ThinkVision LT1423p is a wireless mobile display that connects to the your notebook to deliver a second screen with touch and pen support for mobile users.

The 13.3-inch display is small and light enough to take on the go for multi-monitor productivity. Lenovo offers a wireless model with 10 hours of claimed battery life and a wired USB 3.0 model, powered over USB.

Lenovo expects the mobile monitors will arrive in Q2 2013 at an affordable $349 for the wired model and the $449 wireless model. 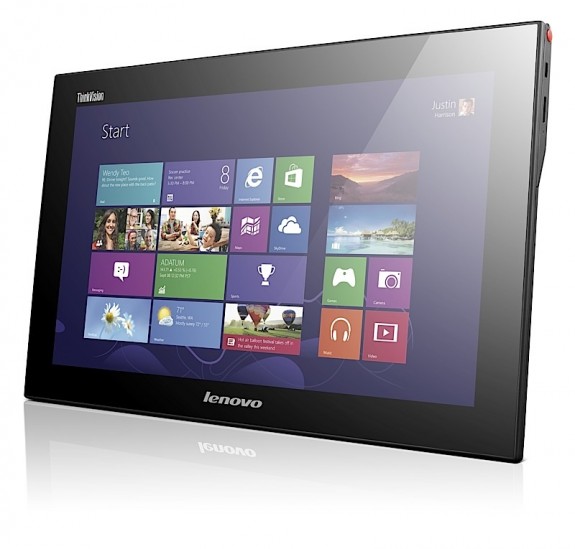 The ThinkVision LT1423p is a wireless display that supports touch and pen input.

The big draw of the ThinkVision LT1423p is the ability to use the wireless display as a touch screen for another PC at home or on the go. The touch display can pair with a Windows 8 notebook that doesn’t support touch, to deliver a quasi-tablet experience.

This 13.3-inch display features a 1600 x 900 resolution with Gorilla Glass. The ThinkVision LT1423p ships with a pen, similar to the one found on the ThinkPad Tablet 2. This pen delivers more precise input than a finger or an iPad-style stylus. Lenovo says the pen supports 256 degrees of pressure sensitivity.

The wireless monitor is thin and light.

This isn’t the first mobile monitor available, but it’s one of the most attractive mobile monitors in recent memory thanks to the wireless abilities and support for touch and pen input.

Lenovo was able to keep the weight down to 1.6 pounds so it’s portable enough to take on long and shorter trips to the cafe or to school.

This type of technology is similar to the Air Display app that turns the iPad and Android tablets into a second monitor capable of touch input. We enjoyed Air Display on the 13-inch Toshiba Excite 13 and on the iPad, but neither of these solutions delivers the pressure sensitive pen input.