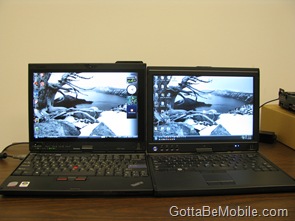 Many of our readers have asked for head to head comparison photos between the Lenovo X200 Tablet PC and Dell’s Latitude XT Tablet PC. Here is the first set of comparisons. I’ll post pictures of the docking stations next, as well as some benchmarks and battery life comparisons later next week.

Here are my initial impressions between the two machines:

Click on each image to view higher res images