The Lenovo Horizon is a 27-inch all-in-one computer that is also a tablet with a two-hour battery life and a collection of fun gaming related accessories. Also, this 27-inch device comes with HDMI in, allowing users to connect a game console or Cable box to take the all-in-one status even further.

The Lenovo IdeaCentre Horizon includes a stand that props the computer up for day-to-day use, allowing the owner to interact with a keyboard and a mouse as well as with the large 1080P touch screen.

After using the Lenovo Horizon for several months Horizon is a clear winner for families and for users who want a device that can pull double or triple duty around the house. 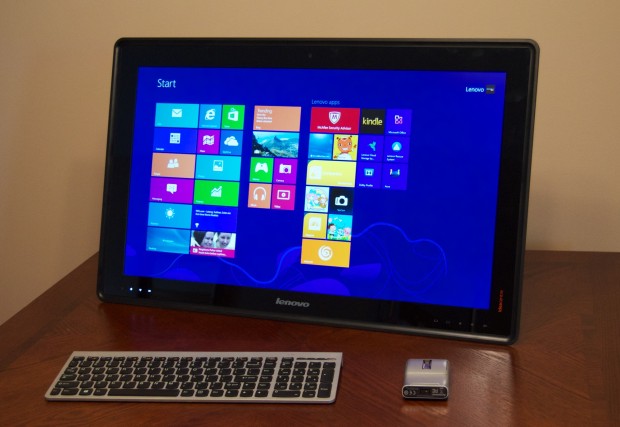 The Lenovo Horizon is a All in one, a table PC and a monitor for video games.

The Lenovo Horizon runs Windows 8.1 and comes with a third generation Intel Core i5 or Core i7 processor, 8GB RAM and a NVIDIA GeForce GT620M GPU with 2GB of RAM. The 27-inch display is anti-glare with a 1920 x 1080 resolution and it supports multitouch. Users get a 1TB hard drive as well as an SD card reader.

What makes the Lenovo Horizon really special is the ability to lay it flat on a table and use it to play games along with physical accessories that extend the usefulness and fun. The system switches from Windows 8 to a tablet specific operating system when laid flat and the internal battery lasts about two hours so you can take it to the table and play without grabbing an extension cord. The video below shows Monopoly with a physical die, as well as air hockey with sticks, suction cup joysticks and a look at Texas Hold ’em on the Horizon. There aren’t a plethora of apps in the Aura mode, but there are some key ones which we enjoy using. 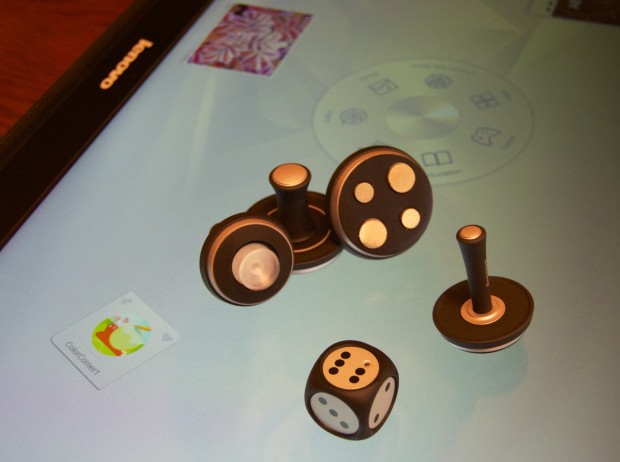 The Lenovo Horizon comes with accessories for gaming in table mode.

Features like this could be gimmicky, but in the past several months we’ve played a decent amount of Monopoly and air hockey on the Horizon and even non-techy users enjoy playing a digital version of Monopoly with a physical die, though it would be nice to have a pair of dice. Depending on your play style, the battery may not last a full game of Monopoly, but we often found ourselves saving the game and coming back to play later.

The kickstand sticks out of the back of the Lenovo Horizon, but folds in when you slide the tablet into table mode. The weight of the system keeps the tablet flat in most cases, and the kickstand allows some adjustment for the tilt of the device when in desktop mode. The Lenovo Horizon is heavy at just under 19 pounds, so a child isn’t going to carry this from room to room, but for our use the weight was not a major issue.

When we got our PS4 in for review, rather than buying a monitor or moving an HDTV into the office I connected the PS4 to Lenovo Horizon using the HDMI in on the side of the device. I was up and running in a few minutes and played the PS4 on the Horizon for a week before moving it into my dedicated gaming room. This is an excellent feature that allows a user cramped on space to use one device for a TV and a computer. If you have an Xbox One, you could connect a cable box to the Xbox One and the console to the Horizon for an integrated solution that would be great for a small apartment or dorm room.

The Horizon as a table pc, which is essentially a 27-inch Tablet.

In addition to these fun features, the Lenovo Horizon is also a fully functioning Windows 8 all-in-one that works great for common household and home office tasks like web browsing, editing documents in office and running other programs in Windows. Switching apps and using Windows 8.1 is fluid and the touchscreen makes navigating and using Windows 8 gestures easy.

The included GPU isn’t powerful enough to make the system a go to device for PC gamers as most modern titles require toned down settings for a game top be playable. That may not be a major issue for the target user who is looking for something that can easily double as a 1080P monitor for a PS4 or Xbox One. 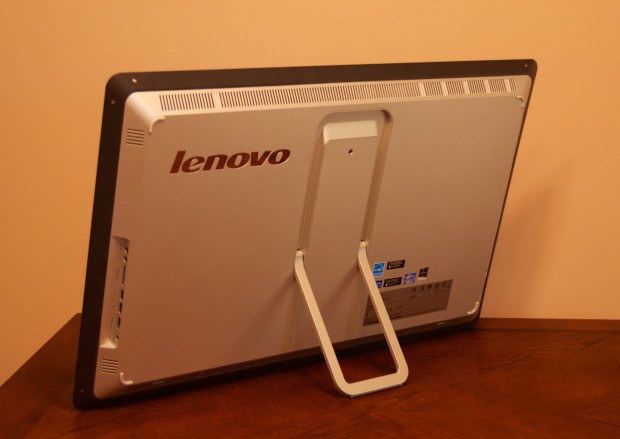 The Lenovo Horizon includes a kickstand.

The Lenovo Horizon is a new mixed device that reminds us of the Lenovo Yoga devices which fit multiple modes of use. This device won’t replace the need for a 7-inch or 10-inch tablet, but it van easily offer a home computer that doubles as the TV and entertainment system when paired with a console. 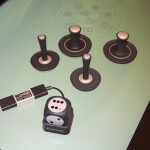 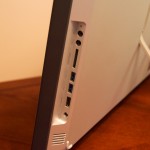 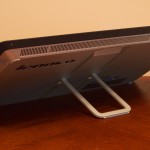 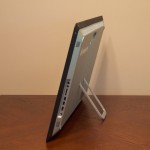 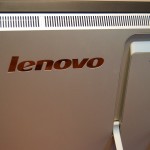 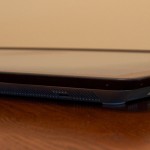 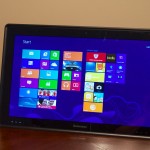 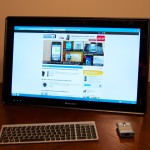