Lenovo introduced the IdeaTab Lynx convertible tablet today at an event in New York. The two-part Windows 8 device features an 11.6″ tablet and a keyboard dock. The Lynx tablet starts at $599, with the keyboard dock adding another $149.

The IdeaTab Lynx is one of four Lenovo Windows 8 convertible tablets in the news today, including the ThinkPad Twist, a more traditional convertible notebook. Lenovo also introduced the  IdeaPad Yoga 11 and revealed pricing and availability details for the IdeaPad Yoga 13. 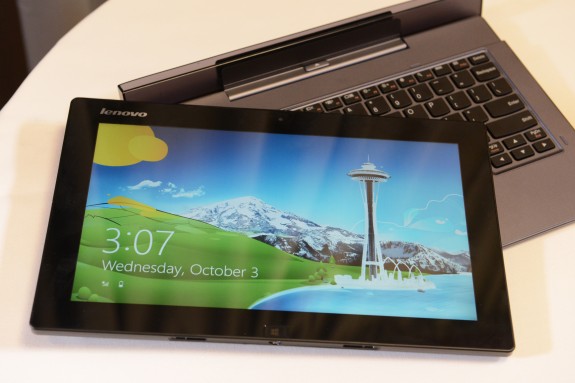 The Lynx runs for up to eight hours on a single charge in tablet mode and for up to 16 hours when docked thanks to a second battery. When docked, the Lynx uses the base’s battery first, which means users will usually have a full battery when switching over to tablet mode. The tablet is powered by a power-saving Intel Atom processor (Z2760 Dual Core 1.8Ghz).

The IdeaTab Lynx will come with either 32GB and 64GB of storage and 2GB of memory. The tablet has a single Micro USB port, Micro HDMI port, audio jack and Micro SD slot. The keyboard dock has two USB ports and a Micro USB port for charging.