Lenovo and NEC joined forces to deliver the Lenovo LaVie Z Ultrabooks, two incredibly thin and light Ultrabooks that offer a standard notebook option and a convertible notebook option that goes from laptop to tablet thanks to a swiveling hinge like on the Lenovo Yoga 3 Pro and other Yoga notebooks.

The two new Ultrabooks for 2015 come as part of the NEC and Lenovo partnership that formed in 2011 and delivers the Lenovo LaVie Z HZ550 and the Lenovo LaVie Z HZ750. Both of these are incredibly lightweight at 1.72 pounds and 2.04 pounds. That’s significantly lighter than the MacBook Air that weighs in at 2.96 pounds for the 13-inch model. Both of the new LaVie Z Ultrabooks are thin as well, with a 16.9mm thickness.

The two Ultrabooks use a Magnesium Lithium body that is 50% lighter than aluminum and as strong as the Magnesium alloy laptops that many companies use. In order to make the LaVie Z HZ750 thinner the convertible device uses a, “direct bonded touchscreen that uses a film instead of cover glass.”

“We are thrilled to bring our first NECP products outside of Japan with the LaVie Z, two of the world’s lightest PCs in their class,” said Roderick Lappin, president and CEO, NEC Lenovo Japan Group and vice president, Lenovo in a press release. “The LaVie models are a true triple play – on the cutting-edge for thin, light and powerful – and the HZ750 adds another advantage – 360° mode flexibility – making these devices real game changers that stretch the bounds of innovation.”

Shoppers can buy these notebooks in May in the U.S. and in Spring 2015 in Japan. 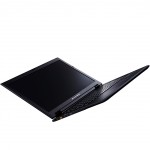