When it comes to buying a new Android tablet the options are nearly unlimited from a wide array of different manufacturers. However, many are extremely expensive and not the best fit for the first-time tablet buyer. Those looking to snag a new Android tablet on a budget, Lenovo has announced two new options here at CES 2015.

The Lenovo “A” series is what the company calls a smart choice for first time tablet buyers. Offering a decent overall tablet experience at extremely low prices. They won’t have the latest cutting edge specs or 1080p HD displays, but will be plenty for those new to Android tablets.

Two new tablets were announced in the A series, those being the new Lenovo Tab 2 A7-10 and A7-30 with 3G connectivity to make calls from your tablets. Two different options to suit both needs. Read on for more details on these budget friendly tablets.

The Lenovo Tab 2 A series this year come equipped with 7-inch 1024 x 600 resolution displays, are powered by a quad-core processor, and equipped with 32GB of storage for apps, games, music and video. Additionally, both tablets support micro-SD cards for user expandable storage, up to 128GB.

After a few minutes with the new Lenovo Tab 2 A7-10 you’ll instantly notice it isn’t a premium high end tablet, considering it’s only $99, but it offers all the tablet essentials at a low price. They’ve also equipped both tablets with Dolby sound output for quality audio and video playback. It feels decent in the hand and comes in a Ebony Black color option, and while it isn’t the most premium feeling tablet, it has a good built quality and should be an excellent tablet for a first time buyer.

The Lenovo Tab 2 A7-30 however, features everything from the sibling above but comes in an even slimmer 8.9mm package, yet offers 3G connectivity for browsing on the go, as well as voice calling. Essentially making it a phablet. Whether you’re browsing the web from your train or daily commute, or making calls from your tablet, this is a great option which will also be budget friendly. 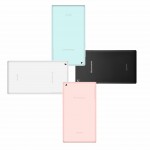 According to Lenovo the A7-10 will be available in January for $99, and the slimmer 3G-connected Lenovo TAB 2 A7-30 will be available from early March priced at just $129, making them both a bargain. The A7-30 comes in Aqua Blue, Cotton Candy, Pearl White or Ebony Black color variants.

Again, these aren’t an iPad Air and don’t have that completely premium feel, but given the price they should make most buyers extremely happy with what’s being delivered. As soon as we get some hands-on time we’ll update about build quality, sound output, and more on these tablets.